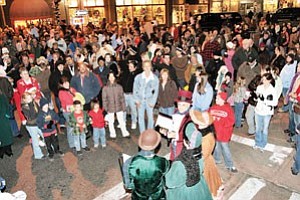 The streets of downtown Williams are packed Nov. 24 as countless individuals came out for the official tree lighting ceremony

It's beginning to look a lot like Christmas-town, U.S.A. Organizer Diana Croteau, chairperson for the Williams Christmas Committee, reported a strong turnout for the 2006 Mountain Village Holiday celebration. Spectators for the tree lighting ceremony, according to Croteau, more than doubled in numbers compared to the first year.

According to Croteau, over 1,000 individuals took part in this year's tree lighting ceremony, which took place last November to kick off the Christmas season. The holiday celebration, held between Thanksgiving and Christmas each year, offers the annual parade of lights, caroling, displays and other attractions such as the Polar Express and outdoor ice skating rink.

"This year was pretty fabulous, I think," said Croteau. "More and more businesses are getting involved in the decorating."

According to Croteau, plans are already under way for this year's celebration with designs to expand the event to make it even larger than it has been in the past.

"Our goal is to have this town lit from end to end eventually," she said.

Croteau reported a rise in sponsorships for the 2006 holiday, totaling around $31,000 ‹ an increase of about $11,000 when compared to last year's total. Mountain Village Holiday is funded through sponsorships and in-kind donations from local businesses and individuals. Croteau said the in-kind donations come from various businesses and individuals who donate labor and materials in lieu of monetary sponsorships. Grand Canyon Railway is the title sponsor for Mountain Village Holiday, as they have been since the event began, and coordinate the event along with the Christmas Committee to coincide with the Polar Express. The giant Christmas tree, located at the corner of Route 66 and Second Street each year, is left up until mid-January to coincide with the post-Christmas runs of the Polar Express.

"We agreed to leave it up so the town would still be festive for the Christmas experience," said Croteau. This year's lighting ceremony is scheduled for Nov. 23. The tree, brought into town through the combined efforts of APS, the Williams Police Department, the city of Williams and the Grand Canyon Railway, should be in place two weeks prior to the tree lighting, according to Croteau.

"We're trying to just make it larger each year. The streets were very busy during the holiday. We've had a lot of positive feedback," said Croteau.

Plans for the 2007 holiday include a larger version of the "Build-a-Village" display, which was located on the west end of town and visible only to westbound traffic. In 2007, the committee plans to make the village visible to both west and eastbound traffic. Build-a-village, said Croteau, includes sponsored replicas of local businesses and area residences. Croteau said she is currently seeking volunteers from anyone who may be interested in helping build the façade for the 2007 village.

"We're hoping that that's going to be much larger next year," said Croteau. Other plans include more ground decorations at Monument Park, located at the east end of town, and to incorporate decorations at Glassburn Park as well."

"Coca Cola will be a gold sponsor (for 2007) and they have agreed to give us concession equipment," said Croteau, who added that the equipment would be used for various food items, including roasting chestnuts.

Regular meetings of the Williams Christmas Committee will begin in March at the Williams Justice Court, said Croteau. Interested individuals can call (928) 607-0123 for more information.