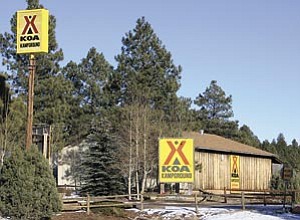 Visitors to Circle Pines KOA can expect a number of amenities, including year-round hot tubs.

Owners of the Circle Pines KOA, located at Williams exit 167, have a lot to celebrate this week thanks to a recent President's Award they received from Kampgrounds of America, Inc., during a recent international convention held in Phoenix. KOA bestowed the award on the local Williams business Dec. 15.

For owners Larry and Sharon Fox, the recent announcement marks the sixth consecutive year they have won the honor - one for each year they have owned the business.

Sharon Fox said it was nice to be honored for the hard work that goes into the campground each year.

"It was great. It was nice to be recognized for all your hard work. Over the years since we've had it. We keep trying to improve each year with what we've done (already)," Fox said. "We started out completely new to the whole thing. It's always nice to seek folks out on their vacations enjoying themselves."

KOA introduced the President's Award five years ago as a way to recognize campgrounds that follow the organization's strict quality standards. Out of roughly 450 campgrounds across the United States and Canada, 180 received this year's award. Franchises honored by this year's award, according to a press release issued by KOA, demonstrated outstanding guest service as well as operational excellence among other qualities.

Fox said the campground offered a number of amenities for people who visit the Williams area.

"It's a family campground. We can accommodate RVs as well as hunters (and) we have quite a few cabins for people who want the campground experience but maybe don't want to stay in a tent," Fox said. Circle Pines offer 19 cabins, as well as roughly 120 RV sites for visitors.

"In the summer we have free hay rides on Friday and Saturday night, as well as country western singing and a group fire area," Fox added. "While the weather is nice we have our mini golf open."

The year-round campground offers organized activities for all ages in the summer, including year-round hot tubs and fun bikes.

"The main thing is to keep the kids busy," Fox said.

"Our busiest time is Memorial Day through Labor Day and we've been averaging over 16,000 camper nights a year, that's how many spaces are rented basically," Fox said.

"We couldn't be more proud of our campgrounds that have helped raise the bar on guest facilities and services," said Shane Ott, chief operating officer and KOA president. "They truly exemplify the best that our industry has to offer."

KOA offers RV sites, tent pads and cabins internationally. The company was established in Billings, Mont. in 1962. Visit their Web site at www.koa.com for more information.