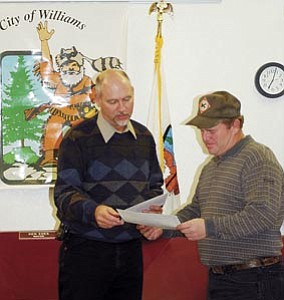 Sheldon Johnson, pictured right, receives an award from Mayor Ken Edes during the regularly scheduled meeting of Williams City Council Dec. 13. Johnson, as well as the rest of the Williams Maintenance Department, were honored for their recent work in building a new sanitation truck for the city of Williams.

Members of the Williams City Council met Dec. 13 for their only regularly scheduled meeting in December. Every councilmember was present for the meeting and approved a variety of topics from the abandonment of a public utility easement for the Reserve subdivision located west of Country Club Road to the approval of water allocation for Route 66 Auto Care, both owned by area resident Mike Cowen. Council members also approved an application proposal that would seek roughly $3 million in GADA (Greater Arizona Development Authority) funds for use in two city projects: Frontage Road and Country Club Road.

Council members also discussed the 3-D theater proposed for Williams during the Dec. 13 meeting. Mayor Ken Edes informed those in attendance that plans were in place for theater developers, represented by Paul Frasier of Blaze Partners, L.L.C., to purchase or lease the land between the Williams Recreation Center and the Williams-Forest Service Visitor Center themselves. According to Williams City Manager Dennis Wells, however, BNSF owners would not consider a direct sale of the land. Frasier was not present for the Dec. 13 meeting.

"We did receive word from the railroad that they will not entertain a sale of the land. They may entertain a long term lease and/or a short term lease, but not a sale. We just received that," Wells said.

Edes said a deal between the 3-D theater developers and railway owners would effectively eliminate some of the issues city personnel faced in regards to the proposed theater.

"Mr. Frasier met with all the council members these past two weeks. They've come up with another idea and, basically, the other idea is to put the IMAX Theater in that land between the Visitor Center and the railroad. They would purchase the land or lease it all on their own," Edes said. "It would be all on their own dime. It wouldn't be on our property. They would be on their own property. That deals with a lot of the issues, not all of them, but that seems to be their favorable solution into this. Because they're a private business, they can deal with (BNSF) differently than we can. They're not getting a rapid response, but they're getting some response, so they're pursuing those issues and I believe they'll be coming back to the city at the end of January, the last meeting in January, to give us a proposal."

Members of Williams City Council approved resolution No. 1217 during their regularly scheduled meeting as well. The resolution, which would seek GADA funds, funds separate from the GADA loan approved earlier in the evening, for the proposed Arizona State Railroad Museum in Williams, is an attempt to help the museum move forward, according to Williams Finance Director Joe Duffy.

"GADA has never funded a B or a C type loan, a loan with not perfect credit," Duffy told council members, adding that the museum would fall under the latter category.

While it wasn't likely the loan would be approved, he said even a negative answer would provide much needed information on the museum to help developers understand what they can do in the future to help it along. Plans also include the application of a $50,000 grant that would allow developers to hire a professional fundraiser to seek money for the proposed museum.

"If we got a professional out there, they might have a little more insight into some of the foundations, some of the organizations that might be more than willing to come up with some money and or equipment," said Al Richmond, founder of the proposed museum.

Council members also answered questions from the public during their Dec. 13 meeting, which included queries about the 3-D theater, the city of Williams' attempt to acquire more wells and the proposed Alco development. Vice Mayor Bernie Heimenz said the Alco project was progressing in a positive direction.

"The developers at the Brookbank property on the southwest part of town, they're going to build a street over to Route 66. They're working with the Pouquette family. They've got about, I think, eight acres of commercial land that they want to develop with them," Heimenz said.

No firm date on the development has been set.

In regards to the city's acquisition of additional wells for the city, Mayor Ken Edes told those in attendance at the Dec. 13 meeting that the city may no longer seek eminent domain on the land eyed for additional well sites. The Pouquette family, long time Williams residents, currently own the land.

"We are pursuing a purchase contract instead of the eminent domain and they have been favorable, although that was probably 90 days ago that we met with them and we finally got a response from them. This was the whole reason we went eminent domain, was the lack of response, but they have responded to us, they've looked over the purchase contract, they've given us a letter referencing various items they have problems with or would like to see adjusted, but I believe as I looked through it, that most of it was minor. I don't think there's too many things that would be prohibitive," Edes said, adding that the city would drop the suit once the contract was finalized.