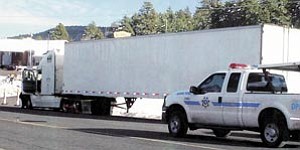 The suspect tractor-trailer involved in the Dec. 13 pursuit, pictured above, was finally brought to a halt along Route 66 near Denny’s Restaurant after a Williams Police Officer was forced to shoot at the vehicle’s tires.

A vehicle pursuit on the eastbound lane of Interstate 40 between Ash Fork and Williams ended with gunshots Dec. 13 as Williams police fired shots to disable the vehicle when it tried to enter the city.

According to officials with the Williams Police Department (WPD) suspect Erick J. Franco, 33, tried to enter the city near mile marker 161, after failing to yield to Arizona Department of Public Safety (DPS) officers near Ash Fork. Franco, driving a white tractor-trailer, failed to stop for pursuing officers and attempted to run a pursuit vehicle, as well as a civilian vehicle, off the road, according to reports.

Williams police, DPS, the Coconino County Sheriff's Office and the Yavapai Sheriff's Office, assisted in the pursuit. Tire deflation devices were also used to slow the tractor-trailer, according to reports, though they proved ineffective against the vehicle.

"We had a pursuit with a tractor-trailer that was started by Yavapai County. The truck driver tried to run the DPS officer off the road and he also tried to knock a family off the road during the pursuit," said WPD Chief Herman Nixon.

Nixon updated members of the Williams City Council on the incident during their regularly scheduled meeting the evening of Dec. 13.

"As usual, we don't get involved in pursuits, but we block off the entrances to the city to make sure that the pursuit doesn't get into the city. That would have been a tragic incident if we had a tractor-trailer coming through there," Nixon said.

According to a press release issued by the WPD, Lt. Mike Graham positioned his vehicle near the off-ramp in an effort to block the tractor-trailer from entering the city. When the tractor-trailer failed to slow as it approached the police vehicle, Graham fired seven rounds, striking the suspect vehicle's tires. The vehicle came to a stop on Route 66, near the Denny's Restaurant, shortly thereafter.

"He's facing major felonies throughout our department and through Yavapai County. The Coconino County Sheriff's Office was brought in to do an administrative review and they will conduct that review on this shooting incident. Our own department will do the criminal investigation," Nixon said.

He said the investigation might be completed by as early as next week. Graham was placed on administrative leave following the Dec. 13 incident. He has since returned to work.