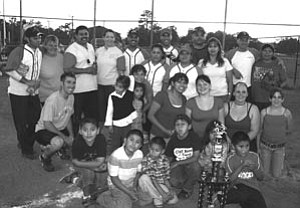 In the final game on Tuesday, Aug. 21, Red Feather quickly fell behind 9-0.

They stormed back with six runs in the second inning and seven in the third to take the lead and another Grand Canyon title.

Red Feather, which was the third seed in the tournament, opened up with a 12-11 win over a scrappy School/Albright team and continued to the finals with a 16-15 win over the second-seeded Squire team.

The regular season, which started in early June featured 42 games between seven teams, providing much excitement and sportsmanship.