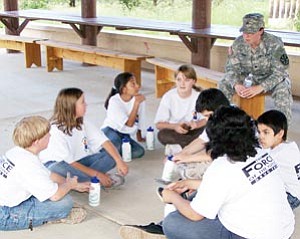 Thirty-five students from Williams Elementary-Middle School take part in the Freedom Academy, held Aug. 17-19 in Prescott. Students learned a number of challenging leadership skills during the camp and participated in physical challenges, such as climbing a wall.

Students from the Williams Elementary-Middle School got a chance to get away recently when they attended the Freedom Academy in Prescott. The academy, held Aug. 17-19 at Pine Summit Camp, was coordinated in conjunction with the National Guard and the Williams Alliance. Over 35 students from grades sixth through eighth attended the camp, according to Sgt. Stefanie Jefferson with the National Guard Drug Demand Reduction program.

"Basically what we do is we take the kids out (and) they learn drug education, leadership, and team building qualities." Jefferson said. "They did rock climbing walls. They did some hands-on leadership reaction, that's basically working as a team to accomplish a task. We call it a mission. They learn responsibility. They learn a lot of self-discipline as well. They also build on their communication skills."

Some of the skills centered on performing a team-related task, Jefferson added. The only catch was that kids could not speak during the exercise.

She said that, overall, this year's trip to Freedom Academy was a successful one.

"Parents told me they really liked it. One of the kids got up the next morning and did push ups and sit-ups, it was wonderful," Jefferson said. "I think it's a good experience."

A number of community members were involved in the camp as well, according to Jefferson. Heidi Komada, Williams Police Officer Bob McCarty and Williams Alliance member Brad Massey all contributed to the camp.

"Most of the time when we conduct this class we don't have a lot of civilian (help)," Jefferson said. "To have them there goes to show how much support we have in the community for the youth. This time it was really a blessing, because the Williams Alliance was able to pay for the camp."

Massey said he thought the camp went well for the students who participated.

"For the age group of the kids, what I saw, they were really involved. I thought they enjoyed it," Massey said. "The feedback from the parents and the students was that they enjoyed it too. It was well worth the time and the effort."

Massey said that one of the most important aspects of the camp, in his opinion, was that students got a chance to work as a group and learn valuable team-building skills.

"Everything they had to do was as a group," Massey said, adding that the camp may be offered again next year should support for the program continue.

"We paid for it," Massey said. "Through our two grants, the Williams Alliance (supported) it. The National Guard puts it on."