Lady Vikings get a chance to knock in the 'kills'
Lady Vikes take on Northland Prep, Mogollon 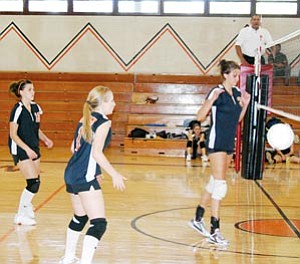 The Lady Vikes played at home against Northland Prep Aug. 21. The girls took a number of wins and losses alike in their first couple of matches for the 2007 season.

"Our girls just start out slow, the same in basketball. They start out slow and then they get into it and they start playing really well." Coach Kristi Frederickson said.

"In those games against Northland Prep, we just had way more endurance than their team did," Frederickson said. "You could tell they were getting more fatigued than our girls were, but they had some real good hitters."

"She played an amazing game. She stood out," Carter said. "She's our middle blocker and she had quite a few blocks and a number of kills."

The girls played Mogollon Aug. 24 and, unlike the Aug. 21 match against Northland Prep, the junior varsity (JV) team got to see a little action as well, playing two best of three matches.

"Alma Hernandez and Vicki Correa both served really, really well in the first match and that's what really helped us out," Frederickson said. "I was impressed. They (the Lady Vikes) looked much better in the match than they had at practice. They played really well."

The Lady Vikes varsity team went up next for a few turns at the net against Mogollon. The ladies ended up losing the first match with a final score of Williams 15, Mogollon 25.

"This was a heartbreaker. We, of course, came out slow in the first game again," Frederickson said.

The girls' fared better in the second game, though not enough to steal the win from Mogollon, who took the game with a final score of Williams 23, Mogollon 25.

"We picked it up quite a bit," Frederickson said. "We basically beat ourselves that first game. We just were not playing like we're capable of playing."

"I don't know what happened. We started out really well and then just let it kind of slip away in the end."

One of the standout players in the Mogollon match, according to Coach Carter, is WHS senior Jenise Pettit.

"She had 13 kills, spikes that result in a point," Carter said. "Amanda Bean and Darian Quasula really stood out in serving. They played tough. Mogollon, last year, were state runner-ups, so for us to go five games and to barely lose was impressive."

The Lady Vikes played in Ash Fork Aug. 28 in their first conference game. They go on to play at home Saturday against Rock Point. Games begin at noon, 1 p.m. and 2 p.m.