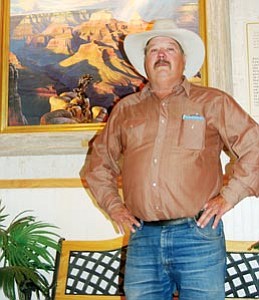 Buster Anderson, pictured above, has lived in Williams for over 45 years and is a fixture for the Williams PRCA Labor Day Rodeo.

Long time Williams resident and PRCA Labor Day Rodeo organizer Buster Anderson was named Honorary Grand Marshal for this year's Labor Day parade. Anderson, 66, has lived in the Williams area for over 45 years and has been involved in a variety of local organizations. The Labor Day Parade is scheduled to make its way down Route 66 Saturday beginning at 10 a.m.

Anderson said he was surprised to be named honorary grand marshal.

"It's quite an honor when your peers and everyone else puts you up there for that. I was really quite surprised," Anderson said. "This is my first time. A friend of mine at Old Trails, Roxen Cureton, (he) will be taking me in the buggy, so I'll be riding in the buggy down the street. He was one of the first people I met when I first came to Williams."

Anderson performs a number of duties at the Bob Dean Rodeo Grounds and has been a staple in PRCA in Williams.

"I've been in the PRCA ever since it's beginning years," Anderson. "I've been there the whole time."

Among his many duties with the Williams Rodeo Committee, Anderson helped build corrals for the drill team - a horsemanship event with over 13 horses - and perform complicated drills with one another.

"It's quite spectacular. We have them every year now," he said. "I think this is the fourth year that we've had this bunch."

His favorite part of rodeo? For Anderson, the answer would have to be the broncs and the bulls. Years ago, however, Anderson team roped during the rodeo.

Prior to Labor Day weekend, Anderson spent a lot of his time preparing the water "drinkers" for the livestock that will participate in the rodeo.

"I've been so busy this time of the year with all that, getting everything put together," Anderson said. "You have all your signs and all your stuff to put up. You can put it up too early. You're just doing a lot of work."

Besides his involvement in rodeo, Anderson was also a Buckskinner and said he has fond memories of that organization as well, though he is no longer involved in the group personally.

"I was in there 20 years," Anderson said. "Twenty years in an organization like that is a pretty good, long run. We had a good time in it, but things change."

Anderson said he doesn't mind being considered one of the "old timers" in Williams. "I've seen a lot of changes in this town and I would say, not necessarily, bad things, some of them not necessarily good. Everything evens out I guess. We had a saying in the Buckskinners that, when anything really serious had to be discussed, we got the 'Graybeards' to talk it over."

Grand Marshal for the 2007 Labor Day parade is 2007 Miss Rodeo Arizona Katie Rose Hill, a photojournalism major at California State Polytechnic University. Hill, 21, is originally from Prescott and plans to attain her master's degree at the Walter Cronkite School of Journalism from Arizona State University. She has held five rodeo queen titles and said rodeo is in her blood.

"Being Miss Rodeo Arizona is not only a dream come true, but it's also an immense opportunity to represent a sport that embodies the values of hard work, determination and camaraderie. It's a sport that I honor and appreciate," Hill said in a recent press release.

This year's PRCA Labor Day Rodeo will offer a variety of events for rodeo enthusiasts to enjoy, including bare back riding, steer wrestling, tie down roping, saddle bronc riding, bull riding and a variety of other events. Performances will run Saturday through Monday with daily performances scheduled to begin at 1 p.m. each day. Advance tickets can be purchased at the Williams Forest Service Visitors' Center or online at www.williamsfestivals.com.

Call Sue Atkinson at the Williams-Grand Canyon Chamber of Commerce for more information on Saturday's Labor Day parade at (928) 635-0273, ext. 210. The theme for this year's parade is, "There's a little cowboy in all of us."