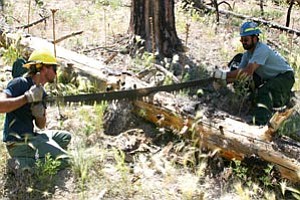 With the initially slow start to this year's fire season on the Kaibab National Forest, Forest Service fire crews found less conventional duties to tackle while awaiting the inevitable dispatch to smoke and flames.

During the last week of June, the visiting Mt. Taylor Hotshots out of Grants, N.M. joined the Williams Ranger District trail crew and Wilderness Coalition volunteers to clear fallen trees from trails in the Kendrick Mountain Wilderness.

Burned by the Pumpkin Fire of 2000, which grew to nearly 15,000 acres, some parts of the Kendrick Mountain Wilderness look like fields of burnt matchsticks. Scenic forest trails are still open on the mountain, but year after year high winds blow down many charred trees, making trails impassable to hikers and horseback riders.

To remedy the situation, the Williams Ranger District sent the crews into the wilderness toting a cocktail of crosscut saws, handsaws and axes.

Because wilderness is intended to be "an area where the earth and its community of life are untrammeled by man," as defined in the Wilderness Act of 1964, the use of motorized equipment including chainsaws is prohibited.

That meant that the crews visiting Kendrick had to get back to basics and use the tools of traditional Arizona lumberjacks.

While the task may have been more time- and labor-intensive because of the equipment, the teamwork and sheer energy of the hotshots, recreation crew members and Wilderness Coalition volunteers quickly led to the clearing of significant portions of three trails in two days. Pumpkin Trail, Bull Basin Trail and the Connector Trail are now much more accessible.

Thankful for help from the hotshots and volunteers, Williams Ranger District recreation technician Sean Murphy said, "The progress is outstanding. It would've taken the trail crew through the end of July to do as much work."

The Mt. Taylor Hotshots said they welcomed the opportunity to spend time in Kendrick Mountain Wilderness, enjoying the awe-inspiring views of forest-covered peaks in the distance and clear blue skies. Many of the crew members said that the wilderness trail-clearing project provided a good change of pace from their usual summer assignments.