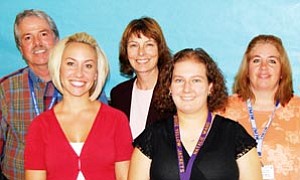 Parents in Williams got a chance to meet their children's teachers Aug. 15 when Williams Elementary-Middle School opened its doors to the public for Meet the Teacher Night. A number of new teachers were on hand for the evening, according to WEMS Principal Donny Bridges. He reported a strong turnout for the event.

Among the new teachers at the school this year are Robert Farrell, Sara Senters, Karen Macks, Natalie Ward and Erin Fink. While each teacher specializes in a different area of scholastic achievement, each said they were happy to be a part of the WEMS staff. For some, this is their first year teaching, while others bring a wealth of experience to their new positions in Williams.

Senters recently graduated from Northern Arizona University and commutes from her home in Flagstaff each day, along with other teaching staff at the school. She said she enjoys teaching the youngsters in the second grade level.

"It's going really well," she said. "So far everyone's really nice. The families that I have met are really nice."

Senters said her further education included an emphasis on early childhood at NAU.

Macks provides extra support for students who need help with mathematical basics this year at WEMS, though her face may be a familiar one to both students and parents alike. She worked in the capacity of para-professional last year at the school and her daughter, Erin Macks, attends the school. Macks' other two children both attend Williams High School. Though she currently holds two degrees from NAU, Macks said she is also at work on her master's degree in education as well.

"I work with a bunch of different personalities," Macks said. "It's very rewarding when they catch on - when that lightbulb flashes."

While not new to the Williams Unified School District this year, Farrell still qualifies as a new teacher, as he started in November of last year. Not only is Farrell new, but his position is as well. Farrell has been a northern Arizona resident for over 35 years. He said he enjoys his involvement with the school district.

"I love it here, it's wonderful," Farrell said. "This was a new challenge, but I knew was up to the challenge."

Besides his work for the WUSD, Farrell also works for the Yavapai County Juvenile Justice Court.

Ward teachers children with learning disabilities in the Williams area and is currently on her second year of education within Arizona. She taught last year in Pinetop-Lakeside last year. Ward, also an NAU graduate, said her students have been a joy to work with.

"They're fun, they're energetic," Ward said. "I like actually teaching curriculum, because last year I taught life skills. This year I teach language skills (reading and writing) and math. The special ed director, Ed Burger, is letting me do technology. Right now we're doing just a lot of computer stuff."

Science teacher Erin Fink has been in the teaching business since 1984. Her first teaching experience was in Phoenix. Fink, also a resident of Flagstaff, said she loves the smaller classrooms offered in the Williams school district.

"They should be very proud of the fact that they have small (classes). I have a class of 16," Fink said. "It's a great attribute for this school. Parents should be proud."

She added that, in her opinion, science was a student favorite among the diverse classes students in middle school have to take.

"You never run out of material," she said. "Of all the subjects that seventh and eighth graders need to learn at that age, I think they most enjoy science."