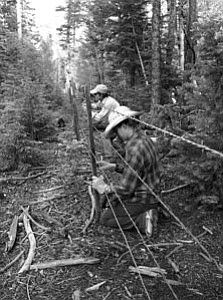 Grand Canyon Trust volunteers repair a section of the wire fence around the Franks Lake Geologic-Botanical Area on the Kaibab Plateau.

About 15 volunteers from the Buckskin Chapter of the Arizona Deer Association and Grand Canyon Trust came to the Franks Lake Geologic-Botanical Area this summer to rebuild part of its exclosure fence.

The 145-acre area includes three relatively undisturbed Kaibab limestone sinks, as well as drainages, plants and soils that are excellent examples of the different stages of ecological development of the Kaibab Plateau.

For those reasons, the Kaibab National Forest land management plan calls for preserving the area's natural features and processes as much as possible.

The 2.5-mile fence surrounding the area helps do that by keeping cattle and motorized vehicles out.

"Grand Canyon Trust is grazing cattle in this area this summer, so rebuilding this fence is a priority," said Dustin Burger, rangeland management specialist for the North Kaibab Ranger District.

The volunteers focused on rebuilding the aspen pole portion of the fence, as well as part of the wire fence that branches off from it.

A falling tree had broken a couple of the aspen panels, and retired Forest Service employee and Arizona Deer Association volunteer Roger Hoverman of Kanab, Utah, said that the wire portion of the fence was in even worse shape.

"This fence was my first project when I came to the district in 1990," Hoverman said. "Now all four corners need to be rebuilt, and I counted 60 breaks in the wire on one side alone."

Burger said that the volunteers rebuilt about half a mile of the worst sections during the work session. He expects the remaining two miles to be much easier and faster to rebuild.

The Grand Canyon Trust plans to return volunteers to the Franks Lake Geologic-Botanical Area next week and again in September for more work sessions.

In a 2001 environmental analysis, the North Kaibab Ranger District identified Franks Lake as one of 17 natural lakes that needed better protection from cattle.

The U.S. Fish and Wildlife Service, Arizona Game and Fish Department and Buckskin Chapter of the Arizona Deer Association have provided manpower, materials and money to repair or replace fences around seven of those lakes.

Grand Canyon Trust became the livestock grazing permittee on the southern part of the Kaibab Plateau, including the area around Franks Lake, in 2006. The Trust is authorized to graze up to 800 head of cattle on the Kaibab Plateau during the summer months.

The Trust is designing and participating in a number of volunteer projects like the Franks Lake fence reconstruction in order to help the North Kaibab Ranger District achieve range improvement goals that would otherwise have to wait for funding.

For more information about volunteer opportunities on the Kaibab Plateau with the Arizona Deer Association or Grand Canyon Trust, visit their Web sites at www.azdeer.org and www.gcvolunteers.org.