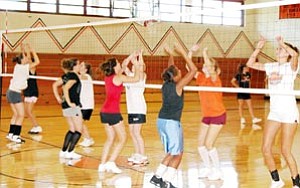 Members of the Lady Vikes get a work out over the volleyball net during practice August 9.

The start of a new school year at Williams High School (WHS) means the start of volleyball action in Williams as the Lady Vikes officially began a new season of practice August 6. Coaches Kristi Frederickson and Jennifer Carter coach the team this year and said they have a pool of strong athletes to choose from.

This is Frederickson's second time coaching volleyball for the Lady Vikes. She coached Volleyball in 2005 and has coached girls' basketball for seven years as well.

"I missed it, so I came back," said Frederickson. "It's a lot of time, but I do miss it and it's really fun working with the girls. We have some really strong female athletes. This year we've got some really strong hitters (and) we've got four seniors on the team that have played really competitively the three past years. I'm looking forward to them competing, especially in the 1A."

Over 20 girls have signed on for what promises to be an exciting volleyball season for the Vikes, according to Frederickson, including a number of new players as well, though new faces aren't the only thing that fans of the sport can expect. Rather than their usual stomping grounds in the 2A division, the Lady Vikes, along with the boys' teams, will play in the 1A division this time around.

"We do play 1A this year and I really don't know what some of the 1A teams are like," she said. "I know Mogollon and Joseph City will probably have real strong teams. We've played them in basketball in the past and they have been really competitive. We do rally scoring now, which means you get a point no matter who's serving."

Coaching, Frederickson said, would be shared between herself and former Lady Vike Jennifer Carter.

"Jennifer Carter is a former student and a former volleyball player, but they have to have a certified person on staff also, so I'm the certified person," Frederickson said. "In order to follow AIA (Arizona Interscholastic Association) regulations, you've got to have one certified coach and generally that's a teacher, but community members can also get a certification as a coach by taking some classes. In order to compete within the AIA, you've got to conform to all their regulations."

Athletes for the Lady Vikes undergo a series of rigorous exercises in order to prepare themselves for game time. Much of the practice, Frederickson said, has to do with strength training. Working with the ball itself is also crucial to handling a volleyball match, she added.

"The first, almost, hour is spent on conditioning, some running, some stretching, exercises to strengthen their abdominal muscles, because you use a lot of the muscles in your abdomen when you jump and you hit and a lot of people aren't real strong through that area," Frederickson said. "Then we do a lot of practicing with passing the ball, setting the ball, hitting the ball, just to get them in the routine. We started doing defensive drills and we do that over and over so it becomes natural when they're on the court and move around so much."

"Some of the games we'll actually play some freshmen teams, so we'll play our freshmen, some of the JV (junior varsity) players in those games," Frederickson said.