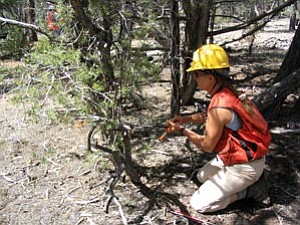 As the Ecological Restoration Institute of Northern Arizona University releases new research on fire ecology collected from the Tusayan Ranger District of the Kaibab National Forest, managers are assessing the forest's current management plan to accommodate the new science, which could lead to healthier forests.

The current plan isn't quite up to par with the recent study, said Bruce Higgins, planning assistance contractor for the Kaibab National Forest. "With this new information, we need to consider modifying our management plan," he said. "That will happen through our forest plan revision process, which is currently underway."

The Forest Service-sponsored study, led by Dr. David Huffman, revealed that historical forest patterns on the Tusayan district's pinyon-juniper woodlands - forests dominated by pinyon pines and juniper trees - were much different than the state of the forest today. Unlike current conditions, historical wildfires were more frequent in the area, and forests exhibited a more diverse mosaic-patterned landscape.

Due to post-settlement fire exclusion, the forests have changed dramatically and become extremely susceptible to destructive large-scale, high-intensity fires that threaten homes and devastate landscapes. This research provides justification for practices like prescribed burning and wildland fire use to maintain safer, more natural ecosystems.

In many parts of the west, this is becoming common knowledge as more and more forests are adopting fire use into management plans - the Kaibab being no exception. However, as Huffman's research indicates, the degree of historical fire frequency and intensity greatly varies from location to location.

The NAU team studied sites at the Canjilon Ranger District of Carson National Forest in New Mexico and the Tusayan Ranger District of Kaibab National Forest in Arizona to look at the fire histories for two very similar habitats - both having similar vegetation, elevations, temperatures, soils and precipitation. Surprisingly, they found that despite the many consistencies between the sites, they had strikingly different fire histories.

At the Canjilon, fire suppression has led to more even-aged stands of trees, increased density of pinyon pines and encroachment of woody vegetation into adjacent shrublands and grasslands once maintained by large, historic, stand-replacing fires. The Tusayan has experienced a similar homogenization of tree communities and reduction in open habitat, but surprisingly, tree density has not changed significantly.

"Our results illustrate the high degree of variability in ecosystem structure and function across the geographic range of the pinyon-juniper type," Huffman says in his yet-unpublished research paper.

Comparing this research to previous studies further emphasizes just how variable fire regimes in these ecosystems can be. Past research groups have described fire regimes at other pinyon-juniper sites in the Southwest ranging from frequent, large-extent, stand-replacing fires to regimes of prolonged fire-free lapses lasting centuries.

Because of the large variations among fire regimes in different forests, Huffman asserts that fire management plans cannot be "one-size-fits-all." In his paper he says, "These findings underscore the fact that site-specific information is essential in developing goals and prescriptions for management of these ecosystems."

Higgins said it is because of this incredible uncertainty that the Forest Service asked Huffman's group to do the study. Without a sound understanding of the Tusayan district's historic fire regime, it would be difficult to prescribe a comprehensive management plan.

"The science is really all over the board for pinyon-juniper forests," he said, "but it's important for managers to understand the old state of the forest in order to make good management decisions."

The current plan for the Kaibab calls for "uneven age conditions to sustain a mosaic of vegetation densities, age classes, and species composition well distributed across the landscape." Higgins said that while this plan hits on some important key points, the forest must consider making revisions to account for new information from the NAU study.

Huffman said that the forest's management priorities sound good, but more attention should be paid to exactly how the plan's goals are accomplished. He said, "I think forest planners need to be asking more questions about what size areas management projects should focus on, how to determine the scale of these projects and how to develop site-specific projects that emulate the historical patterns on the landscape."

In the research paper, Huffman's team gives some suggestions on how to manage in-line with the historic state of the pinyon-juniper woodlands, saying, "Ecological restoration treatments at Tusayan would likely include targeted reduction in overstory tree density and periodic application of fire."

Updating a forest plan can be a long and challenging process, but Forest Service officials at the Kaibab are adamant that they eagerly welcome new scientific research to help develop informed management plans. Along with social and economic concerns, they hope to emphasize the importance of sound scientific research in future forest agendas.

"I hope we end up with a plan that is more tied to a public, collaborative process and the best available science," said Higgins. "We need to look at how forest use is changing and work with local communities, government agencies and native tribes to decide how to proceed."