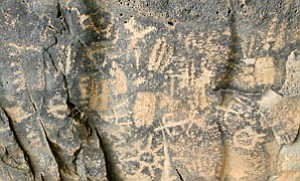 Keyhole Sink on the Williams Ranger District is an ideal location to view petroglyphs created more than 1,000 years ago.

For many archaeology lovers, discovering the Kaibab National Forest is like the geology buff first laying eyes on the red rocks of Sedona. It is almost beyond comparison.

The KNF boasts more than 9,000 identified archaeological sites. That places it in the top five forests nationwide in terms of the number of recorded sites. The forest also has the distinction of having 42 sites listed on the National Register of Historic Places.

People travel from across the country to experience the prehistoric and historic sites on the KNF. But, on a warm, early summer day, it was a group from much closer that toured the Kaibab's treasures.

Members of the Northern Arizona Chapter of the Arizona Archaeological Society spent a Saturday visiting three sites on the Williams Ranger District that are representative of the kinds of sites found forest-wide.

Mike Lyndon, an archaeologist and the acting tribal liaison for the forest, led the six-member group.

The first stop on the tour was Keyhole Sink, a prehistoric rock art site that has been developed into a popular interpretive hike for use by forest visitors. An easy mile-long hike leads to a scenic box canyon where prehistoric residents left their marks carved into the canyon's gray, volcanic walls.

Archaeologists estimate that 1,000 years ago or more, people used rocks to peck images into the dark basalt. The images, known as petroglyphs, suggest that the area was important as a hunting ground. In fact, one of the petroglyphs is a dramatic depiction of a deer herd entering the canyon.

"I've been at least half a dozen times to Keyhole Sink," said Joe Jordan, who participated in the tour with his wife, Nancy. "But, I learned a lot more in one day with Mike (Lyndon) than on any of my other visits."

The next stop on the tour was a wash located just east of Sitgreaves Mountain. The wash, which is filled with hundreds of petroglyphs, was likely a travel route used by prehistoric populations between 650 and 1050 A.D., and possibly much earlier.

The final stop on the Kaibab tour was a historic railroad trestle, probably dating from about 1902.

Lisa Edmonson, who accompanied husband Greg on the tour, said she considered the archaeological opportunities, like those on the Kaibab, to be one of this area's major draws. She added that she has had a lifetime interest in archaeology and now has more time to pursue that interest through her affiliation with the Arizona Archaeological Society.

The Arizona Archaeological Society was founded in 1964 to serve as a bond between professional archaeologists and avocational, nonprofessional volunteers in order to foster interest and research in the archaeology of Arizona; to encourage better public understanding and concern for archaeological and cultural resources; and, to protect antiquities by discouraging exploitation of archaeological resources.

According to Edmonson, members of the Northern Arizona Chapter meet once a month and take field tours about six times per year. The KNF is just one of the areas they enjoy visiting.

"It is great to be able to get out in the forest and the fresh air and try to find a site that no one has been to in 30 years," said Greg Edmonson.

For archaeologist Lyndon, it is a special treat to share important KNF sites with a group of people so interested and involved in their preservation.

"It is so important to us to have people willing to volunteer their time, energy and talents to protecting our cultural resources," Lyndon said. "Without them, our heritage program would not be as successful as it is."