Memorial a tribute to longtime resident 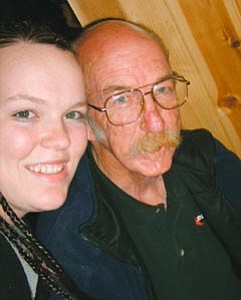 Longtime Canyon resident Jim Stickler, with daughter, Samantha. Family and friends gathered last week to remember his life and comfort one another.

James Robert Stickler was remembered last Friday by friends and family as a generous friend, an irrepressible prankster and, in the words of lifelong friend Rick Parsons, "an unusual soul."

Jim Stickler, a longtime Grand Canyon resident and groceryman at the general store, passed away in the early hours of July 26, 2007 at age 61, after a period of illness. He was laid to rest in Grand Canyon Cemetery on Friday, Aug. 3, 2007, following a service at the Shrine of the Ages, officiated by Pastor Rick Wiles of the Grand Canyon Baptist Church.

Delivering the eulogy was Geoffry Stickler, who recalled the benefits of growing up in his popular and fun-loving older brother's shadow and of his pride in what his children achieved - particularly daughter Samantha's full basketball scholarship to the University of Nevada - Las Vegas.

"Every time I talked to my father, I could see how proud he was," said Samantha.

"Every time I stepped onto the basketball court, he was the first person I was thinking of. I know he'll be there to watch the games and cheer me on ... and maybe provide some divine intervention help with my free throws."

She also noted that her father could be single-minded, and illustrated it with a story about how she and her brother tried to get him to retire a particular hat, "the oldest, ugliest, grossest thing you've ever seen."

No matter how many replacement hats they bought, or how carefully they tried to hide the original, she said he always found it.

"It was one of those stubborn traits I see in myself," she said.

Born in Henderson, Nev., to Robert James and Florence Stickler, Jim grew up in Yuma, Ariz., and later, Page, Ariz., graduating from Page High School in 1963. His skill on the basketball court, a thick head of hair and his charm made him "a chick magnet," Geoffry recalled, and he credited him with "kindling in me that want and desire to be sought after by women."

"He excelled in basketball," Geoffry said. "Until the day he passed, it was his passion."

Jim Stickler was also passionate about hunting, fishing and playing a good joke - constants that marked his entire life and sparked a range of stories - too many to be told at Friday's service.

In fact, to capture them, the family set up a video camera at the reception afterward to give those who knew him a chance to share their favorite anecdotes.

Through those that were offered by Geoffry and others, a picture emerged of a man who loved his life, lived it fearlessly and shared his spirit of fun with whoever happened to be present.

"He was like the guy in the history books, 'Damn the torpedoes, full speed ahead,'" said Parsons.

Daughter-in-law Vikki recalled that during her first meeting with her future father-in-law as the girlfriend of his son, Patrick, he embraced her and welcomed her to the family. It was a surprising move, considering she was just 15.

"At 15, the last thing on my mind was becoming part of anyone's family," she said. "But 13 years later, the stories keep coming. Everyone has at least one story about him."

She shared one of her favorites, about a fishing trip on which, she said, "Jim and his companions were doing really well as usual."

His efforts to land a big one drew a crowd, who watched him reel in a prize catch.

"He said, 'Here, we don't keep the little ones,' and he threw it back," she said. "There are hundreds of stories out there just like that."

Wiles exhorted the mourners to comfort one another with those stories, not just in the days ahead, but during holidays and other special times.

"Down the road, this family will need your support," he said.

Jim began his career in the grocery business at the Babbitt's store in Page, also working for Babbitt's in Flagstaff and Holbrook before coming to the Canyon where he spent the past two decades, earning a reputation as a hard worker and consummate groceryman.

According to Pastor Wiles, he was also known for his daily greeting as he passed through the receiving area - "Ladies, are we having fun?"

"He was always trying to say something to set you at ease," he said.

Musical selections included "Highwayman" by the Highwaymen and "When I Get Where I'm Going," by Brad Paisley. Wiles offered Scripture readings from 1 Corinthians 15:50, John 14:1-3 and John 11:25-26.