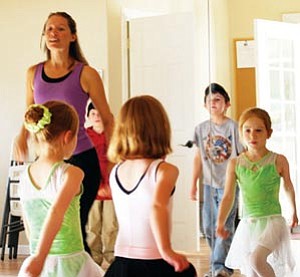 Young dancers get their groove on with instructor Marisa Masson of Stepping Out Dance Company.

The art of dance is nothing new to Marisa Masson of Williams, owner of Stepping Out Dance Company. She's been practicing dance in its many forms since the age of six and, for the last year, has been offering lessons privately from her home. What is new is Masson's 750 square foot dance studio, located behind the family's home in the Country Club area near Elephant Rocks Golf Course and the official beginning of dance lessons for the Williams area.

Masson said she had never really considered holding dance classes despite her history in dance, until friends began to press her about teaching again.

"My family's my first priority and I thought it was something from my past that I wasn't really going to go back to," she said. When Masson's husband, Joel, encouraged her to offer the classes as well, she decided to go ahead and try it.

"That's when I started doing it here in our family room," Masson said. "I did that all the way from September to May and really enjoyed it. Halfway through the year we decided to go ahead and build a dance studio. As the year went on I gained a few more students and I just found it so exciting, finding that passion again - that creative outlet to be able to dance again and to be able to share it with kids and to seem them be excited about it."

Masson held a dance recital in May of last year. At that time she had 13 students. She had 15 students for a dance workshop that she held this summer from her studio.

Masson offers a weekly dance class that meets each Tuesday evening, though she is also offering private dance lessons as well. She plans to start a full schedule of classes next month and will offer instruction in ballet, jazz, hip-hop and a boys tap class. Classes will meet Tuesdays, Wednesdays and Thursdays at various times in the afternoon. A ballroom dancing class, beginning August 15, will also be held for adults out of Masson's studio.

Masson said most ballroom dancing styles have remained the same over the years, though there are variations.

She said teaching kids offers her a chance to share the excitement of dance with younger generations.

"My passion is to share the excitement of dance with the kids. It's such a great way to express," Masson said, adding that she keeps up with her own training as well by visiting with her old teachers in California.

"Whenever we take a trip out there, I try to take a class or two just to brush up on what's current, what's new, to try and stay in the loop," she said. "Then I can bring it back and share it with the kids. Most of my kids are still in beginning stages, so there's quite a lot of material that I have for them as they grow and progress. It's kind of neat just to see, in one year, how much the kids have learned. They have such great focus. They can keep up with what's being taught. There's so much in music that kids can learn from. God's given us all amazing bodies that can learn just like our minds and become more flexible."

Masson said she recommended solid colored leotards for ballet classes, but added that she is flexible on dress codes.

"If they don't want to wear leotards, if they want to dress a little more modestly, they can wear more layers. With any dance studio it's nice to have some sort of code, but I'm not actually real strict with it," Masson said. "Ballet is really a base and a foundation for any type of dance, a lot of kids don't realize that, especially with hip-hop, that it really does take grace and flexibility and a lot of technique too do hip-hop as well."

With hip-hop classes, she said dress is very informal, tennis shoes and loose fitting clothing Masson went to dance school for 15 years, where she learned ballet, tap, jazz, hip-hop and subsequently attended Chapman University, where she took a year of ballet and tap. After college, Masson became a teacher, where she taught for five years, though dance was never too far off. Masson continued to take dance classes after she was married and eventually began to assist the instructor with younger dance students in the class.

Masson said her favorite style depended on what mood she's in, though she said tap has always been her "all-time" favorite.

"I've just always loved the challenge of tap. I'm really into rhythm tap," she said. "I enjoy getting the kids to pick up on a rhythm. Sometimes we'll clap out a rhythm or each kid will make up their own rhythm and we'll come up with a step that goes with it. It keeps their minds working and for me, it keeps my mind fine tuned. I also really enjoy ballet and lyrical too - the expression that can come out of that. Hip-hop is just fun and it's a really fun workout too."

For more information on Masson's dance classes visit her Web site at www.steppingoutdancecompany.com or call Masson at (928) 853-9923.