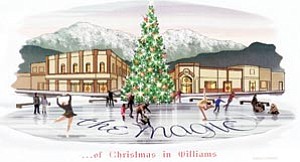 Christmas Committee Chairperson Diana Croteau presented her plans for this year's tree lighting ceremony to members of the Williams City Council during their regularly scheduled meeting July 26, which includes a new name for the popular annual event. Croteau asked council's approval for her plans during the meeting. Called, "The Magic of Christmas in Williams," the event is planned for November 23 - with ceremonies slated to begin at 3 p.m. in the downtown area.

"I know it seems a little early to be talking about Christmas," Croteau said to council members present for the meeting. "As we did last year, we're going to have the east end, Monument Park and all the decorations before Polar Express, which I believe starts November 8. We need to get council input and feedback. We would like to keep the tree at Second Street again this year (and) we would like to expand on the event a little bit. Since we did close the street down at about three o'clock that afternoon, which did shut off some of the businesses. We would like to start entertainment at three o'clock in the afternoon and proceed with that until about seven, through the actual tree lighting, which is at six o'clock."

Plans for the holiday event include costumed characters that will wander the downtown area, such as reindeer, a snowman and various Coca-Cola Bears. Two stages are also proposed for the area near Second Street and Route 66, Croteau said, with live remotes planned as well. Entertainment, she continued, would rotate every 30 minutes throughout the afternoon and evening.

"I have live remotes from different radio stations that are willing to come and be a part of that," Croteau said. "We'll have two different stages, one in front of Russ Lyon (and) one in front of the jeep tours. That can all be set up without interference to the roadway and we can do that all in advance and then close the street down about three o'clock. We have petitioned businesses that are involved in that. There were a few that we have not made contact with, but they have said that they will sign it."

"The committee has decided, because there was such confusion with the part that we were doing with sponsorships and Mountain Village Holiday, which is the chamber, to change our portion of it to the 'Magic of Christmas in Williams' and we have designed a new logo, so everything that we do for the tree lighting and the village down at the other end at Monument Park will go under the Magic of Christmas in Williams," Croteau said. "That's why the committee thought it was best to change the name of our portion of it - to avoid any confusion as to where the money was going. That was an issue of the sponsors last year. They were giving us money thinking it was going to the parade and some of them said they were giving money to the chamber thinking it was going to the tree lighting, so that's why we decided to change the name for the tree lighting event to eliminate that."

Croteau said the committee still plans to go ahead with their other yuletide offerings as well.

"We're still going to do the 'Build a Village' and add to that this year," she said. "I understand that we're (also) going to have more historic lights down Grand Canyon Boulevard (and) we're going to add to that."

Nov. 23 and added that a number of local businesses have already expressed their support for the Christmas event.