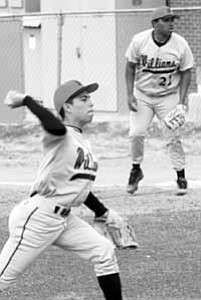 Derek Gauna at the pitcher¹s mound during the April 5 game against Camp Verde. The Vikes will take on Valley Sanders tomorrow with games beginning at 1 p.m. and 3 p.m.

The Williams Junior Varsity team took on Flagstaff during an away game April 10. It was the last game of the season for the JV squad, who ended on a sad note with two losses to the Flag team. The first game finished off with a score of Williams 11, Flagstaff 13. An even bigger loss waited in the shadows for the boys as they went into the second game of the day, losing that game by a score of Williams 8, Flagstaff 18.

"It was probably the windiest game I've ever played," said Coach Phillip Echeverria. "Both games, it was probably blowing 55 to 60-miles-an-hour and our kids fought hard. To play a bigger school like that and to have an opportunity to win a game is always a plus. That kind of wrapped up our JV schedule."

The JV Vikings ended their 2007 season with an overall season record of 2 and 4, two wins and four losses.

"We have a lot of young kids that are out right now and that's the future of our baseball program, those young kids, and how well they improve throughout the summer and next year," said Echeverria.

The Vikings, meanwhile, played a couple of varsity games against St. John's April 12. Like the JV boys when they took on Flagstaff, the St. John's team got the better of the varsity team during the first game of the day. The final score for the match ended with Williams 5, St. Johns 9.

"It was a 5, 5 ball game going into the sixth inning," Echeverria reported. The team lost their equal footing, however, after giving up four runs to St. Johns. "(It was) another windy ballgame. We misplaced some balls in the outfield and had a few errors in the in-field that led to some runs. That's the key to our season this year is whether or not we give up runs on errors. We seem to do that at critical times and then we come up with runners in scoring positions at the plate and we're unable to drive in those runs and get key hits here and there. Derek Gauna threw that game for us, threw another good game for us, kept us in the ball game and we just couldn't come through for him in particular situations."

Things didn't get any better for the Vikings in their second game of the day. The Vikes dropped their guard once again, losing with a final score of Williams 2, St. Johns 8. Keaton Hageman, along with relief pitcher Trevor Parenteau, pitched the ball for the Vikings.

"Both guys did a good job on the mound, throwing strikes," said Echeverria. "Once again we just had a tough time out in the field."

The Vikes' overall record, as of April 16, stands at 7, 12, and 1 overall, with seven wins, 12 losses and one tie. The Vikings are 0 and 4 in conference for the season with four losses and no wins. The boys will play host to Valley Sanders tomorrow for more conference action at Williams High School, with games beginning at 1 p.m. and 3 p.m. Tomorrow's game will wrap up the Williams Vikings 2007 conference season.

"If we can come away with a couple of victories there or a (single) victory, that will put us in third in the south division of our region and we'll travel somewhere up on the north side on Wednesday, the following Wednesday. Then we'll need to win one game to make it to the state playoffs."