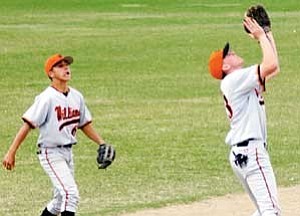 Viking Jake MacDonald makes the catch during the April 5 game against Camp Verde as Keaton Hageman looks on. The Vikes lost to Camp Verde 3 to 15.

The Vikes played against Joe City April 3 in an away game with the junior varsity team, who fared better than the varsity boys. The JV team pulled off a win against the home team, beating Joe City by a score of Williams 7, Joe City 3. The win gave the JV boys an even record of 2 and 2 overall for the season. The JV wrapped up their season with a match against Flagstaff April 10.

The boys' varsity did not fare as well as their JV counterparts during the April 3 match, losing the game by a score of Williams 3, Joe City 7.

"Alex Ruiz threw five innings in that game and threw well for us," said Vikings Coach Phillip Echeverria. "We were missing a couple kids due to discipline reasons and it was a hard fought game. We just couldn't pull out the victory. We couldn't get some clutch hits when we needed some hits in that game."

On April 5, the Vikings opened up conference play with a doubleheader against the Camp Verde Cowboys on the Williams High School (WHS) ball field. Things did not look good for the Vikes after they lost the first game by a score of Williams 3, Camp Verde 15, a trend that would continue throughout the day.

"I don't think I have ever seen a team come out and pretty much, one through the eight hitters, swing the bat as well as Camp Verde swung the bat against us. Keaton Hageman threw the first game for us and, pretty much, everything he threw up there they hit real hard and found some holes. Once again we made a few errors in some different situations. We gave up four runs in the first, but turned around and scored three in the bottom of the first, so it was a 4, 3 ball game. In the second (inning) they came out and scored another five runs and made it 9, 3 and we didn't get anything going after the first inning. We may have sent another four or five guys on base in that first game."

The Vikes fared no better in the second game of the doubleheader against Camp Verde. The team took another painful hit, losing to the Cowboys by a score of Williams 2, Camp Verde 11.

"Derek Gauna threw that game for us and threw well, (he) threw all six innings and did a good job," said Echeverria. "Derek kept them a little more off balance and did a good job and we ran into a few problems, discipline problems in the first and second game. So we had some people out of position that had not practiced very much. They did the best they could and we, once again, made a couple of errors that led to some big innings for them. We're behind in hitting as to making contacts and putting the ball in play and hitting the ball hard. We hit very few balls that are hard. Jake MacDonald has done an outstanding job. The last three games, at the plate, he has hit the ball hard pretty much every time he steps up in the box. He's really come through for us at the plate."

After the pair of losses, the varsity record stands at 7, 10, and 1 overall. The Vikes are 0 and 2 in conference. The boys go to St. Johns tomorrow for more conference play. Valley Sanders will challenge the Williams players April 19, with regional baseball scheduled to begin April 25.