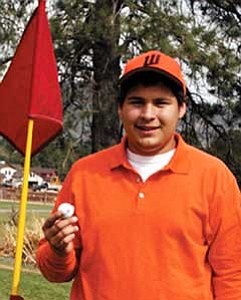 It started out as a normal day for the Vikings golf team when they set out for practice at Elephant Rocks Golf Course April 5, but that all changed when 18-year-old Mathew Verser hit a hole-in-one on a par-3 at hole number 3. The shot was a historic one for the Williams High School (WHS) team. Verser has only been playing the sport for two months this season, though he played a little last year as well.

"It's the only sport I play this year, I used to play basketball and football," said Verser. "We were on the three, it's a par-3. I hit it and it was a pretty clear shot. It just disappeared. I lost all my breath and everybody started tackling me."

Verser used an 8-iron for the shot and said he plans to keep the ball as a reminder of his lucky day at Elephant Rocks. Verser said he would like to hit another hole-in-one someday, though he doubted it would happen again any time soon.

"I'm going to try. I don't know if I'll hit another one, but it'll keep me playing," said Verser.

"We were out there practicing. They did their warm-up on the driving range and did some putting and some chipping for warm-up. We went out to play a few holes to simulate a round, not a full 18, but put ourselves in a situation of a match where you have to make certain shots under certain conditions," said 2007 golf coach Denis Kirkley. "At the third hole, par-3, about 150 yards and he hit a really good shot, a beautiful shot; it had a nice high arc to it. It landed about 12 feet in front of the hole, trickled up and we could hear it hit the pin. I thought it had kicked off at first. The ball had kind of disappeared, but then we found it went in the hole. Mathew fell to the ground because he was so stunned (and) we piled on him a little bit. It was an exciting event. For some people, they play a lot of golf and they never have a hole-in-one. It's quite rare."

Kirkley admitted to one hole-in-one in his golfing career. He said that, occasionally, golfers would have more than one. At Elephant Rocks Golf Course, Kirkley said, there were possibly one or two hole-in-one shots scored annually. Kirkley added that the shot was more than likely a first for WHS.

"I don't know that any player has ever had a hole-in-one while participating. It's possible (that it was a first)," Kirkley said. "It was just a really perfect shot."

Kirkley encourages members of the team to play a full 18 holes every day, but realizes that can be next to impossible with busy school schedules. Five golfers are enrolled on Kirkley's team for the 2007 season.

"With normal walking, a round of golf should take about four hours and if we got out there and started at four o'clock even, that would make eight o'clock and it's not light at eight. These guys tend to take a little longer than four hours," said Kirkley. The Viking golfers have played in a number of competitions this season.

"We played at the Sedona Golf Resort (and) we just came back from a competition. We didn't shoot very well and we don't have a lot of talent, but three out of the four golfers that we took, it was a two day tournament, three out of the four improved their scores. That's really what we're looking at, trying to make slow, steady improvement."