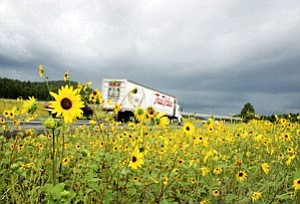 Recent and consistent summer rainfall helped quash wildfire fears over the typically dry months and topped yearly averages for the region, producing bright beds of wildflowers throughout the area.

The puddles are full, the fields and forests are in full bloom ‹ both evidence of the fact that rainfall levels received during the 2006 monsoon season in Williams exceeded the average total precipitation calculated by the National Weather Service.

In the months of June, July and August, estimated averages in Williams during the past 10 years total .47 inches, 2.84 inches and 3.21 inches (respectively).

So why do all of the local reservoirs look so low?

According to city of Williams Raw Water Storage Reports, the five local reservoirs including City Dam, Santa Fe Dam, Cataract, Kaibab and Dogtown lakes, are only at 46 percent capacity, in comparison to a recorded 75 percent capacity at the same time in 2005.

The truth lies in careful management of the City of Williams' water reserves.

Williams Water Department Supervisor Ron Stilwell explained the city's decision to draw mainly from area reservoirs this year as a strategic approach to saving city revenue. Last year, the city relied more heavily on the newly drilled Dogtown wells out of necessity to develop the wells and maintain their structure, Stilwell said.

Now that the integrity of the wells has been established, the city can rely more heavily upon the reservoirs and enjoy the reduced cost.

According to Stilwell, through the summer of 2006, the city has used a combination of well water, lake and dam water. This blending method maintains the well ‹ its structure and mechanical equipment ‹ while at the same time saving money.

"Well actually, the city cost to run the wells is $40,000 per month, per well. We did use the wells some this summer, but not as much, [in order to] save money," Duffy said.

"We also try to keep the lakes at usable levels as a recreation resource."

Both Duffy and Stilwell explained that the city's wells have been a saving grace in past years, such as 2003 and 2004, when monthly statistics for June and July were recorded between 0 and 1.78 inches.

Thus, city officials will continue to analyze the rain levels and water resource usage on a yearly basis, Duffy said.

Flagstaff's National Weather Service Warning Condition Meteorologist George Howard said although the mountainous regions of northern Arizona received above average rainfall this season (Flagstaff at 133 percent and Grand Canyon at 121 percent), most locations north and east of the rim were below normal.

"People forget that we're in a longer term drought," Howard said. "We're still in severe drought, which most locations have been experiencing since 1994. With this season's rains we'll see only a slight relief of the drought conditions."

Howard attributed the ebb and flow of rain and drought to the "natural processes and climate variability" of the Southwest. "It shouldn't be a surprise," he said.

Howard and Stilwell discussed the greater importance of winter and spring precipitation and the ability of snowmelt to impact the well and reservoir levels more significantly.

Because the monsoon rains are of short duration and fall in isolated bursts upon scattered locations, they have little impact upon reservoir and groundwater regeneration.

As the heavy snows melt for weeks or months at a time, the waters saturate the ground and have ample time to soak deep into the holding places.

Howard's reference to the long-term drought can also partly be seen in the National Climate Prediction Center's forecast for the early winter months of October, November and December. National Weather Service Meteorologist Dan Leblanc says that despite the above-average summer moisture, the center is leaning towards a 33-40 percent chance of below-normal precipitation.

The Williams norms for those months ‹ in liquid precipitation as opposed to snowfall ‹ are 1.76 inches for October, 1.75 for November and 1.52 for December. Temperatures for those months are said to have a 46 percent chance of being slightly higher than normal.

So don't hesitate to look longingly upon those winter skies, because we need the moisture to maintain our lovely, green northern Arizona home.