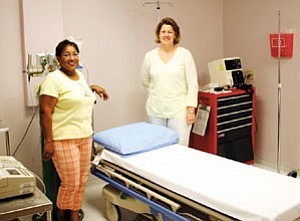 The Williams Health Care Center has been in town providing service for decades, and so have a few of its employees ‹ manager Cindy Christman and head nurse Nell Brown.

A Flagstaff native and Northern Arizona University graduate, Christman started at the WHCC in 1981 as a relief X-ray technician one year after marrying a Williams resident.

"That was just after this facility closed as an inpatient hospital, so that was a transition for the community," Christman recalled. "We were open 24 hours at that time."

As Flagstaff continued to grow, Flagstaff Medical Center started being the hub for care in the area, forcing the Williams Hospital to begin going the way of many rural care centers ‹ scaling down and/or closing. An unfortunate trend, since it was volunteers and community members who constructed the WHCC back in the late 1940s.

At the same time, the Williams Hospital had been managed by FMC until the mid 1980s when Samaritan Health Services (later to become Banner Health Services) took over.

"The community has always been deeply invested in this facility," Christman said.

It didn't take long for Christman to work her way up to a full time position and by the early 1990s, she had gained enough experience to be offered a management job.

"At that time, we were just providing emergency care. This building was essentially empty and we only used a small portion," Christman said. "I've grown up with this place."

In the mid 1990s, the facility lost its tax subsidies and was forced to close and reduce the staff to just Christman, Dr. CesareoVasquez, and Brown. Those tax issues eventually got cleared up and Christman said the facility has come back growing ever since.

"I now have a staff of 30," She said. "I've always felt like the community of Williams deserved to have good, accessible health care. There's some core people that have stayed with me and really allowed us to grow and expand."

Accomplishments Christman is proud of include instituting the facility's annual health fair, attracting the center's first full-time physician (Vasquez) and being able to offer primary care, establishing a physical therapy department, substantial remodels ‹ including an all new urgent care area ‹ and expansion of services, such as X-rays and a lab with on-site testing.

"For a small town, we really have a lot of valuable services here," Christman said. "And it wouldn't be possible without our great staff here and without the support of the community. None of what we do would be possible."

One of those staff members includes Nursing Manager Nell Brown, who has been with the facility for an even longer amount of time than Christman ‹ 33 years.

Brown has been in Williams since the young age of three, was educated at NAU and began at the center as a floor nurse in 1973, a time she recalls in which the WHCC had 28 inpatient beds.

In 1977, Brown went to work for Vasquez at his local private practice, but stayed with the WHCC in a part-time capacity before returning to the center full-time some years later.

"I guess you could say I never really left," Brown said, adding that it's been family, the community and the staff that have compelled Brown to stay. "My mother is still here and I don't know, I guess I just really love it here."

In 1990, Brown was awarded the title of nurse manager and during her time at WHCC, has seen many changes as well, the most memorable of which include changes in practice and technology.

Brown said that even the way nurses have dressed ‹ right down to jewelry and perfumes ‹ has changed dramatically.

The 33-year nurse, who currently supervises eight, doesn't plan to give up anytime soon and is also heavily involved in things outside the facility, such as being the team nurse for Williams High School athletics and attending the recent Weed & Seed drug/gang interdiction program meetings.

Both ladies have seen patient loads quadruple in the past 10 years and the facility plans to institute continuous improvements to its structure and services as time goes by.