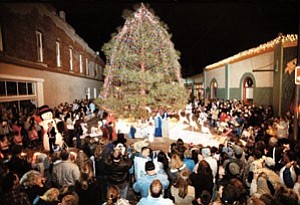 Photo/Scott Warren of Williams Color Lab Hundreds of people admire the Christmas tree as it is officially lit during the 2005 Mountain Village Holiday celebration.

Almost everyone enjoys the holiday season and those who do are being asked to think about contributing to the cause in some way.

That's because currently, there are only six members on the Williams Mountain Village Holiday Festival of Lights Committee ‹ the organization responsible for bringing much of last year's holiday joy to life. To make things work, the group will need bodies ‹ and lots of them. Otherwise, the season may simply slip by, leaving the public to ask, "What happened?"

For that reason, the committee is hoping the residents of Williams will once again take up the proverbial arms and assist by either donating, sponsoring, helping gather sponsors, or becoming a committee member to help organize a great Mountain Village Holiday. Though still some months away, the committee has been working on this year's event ever since the last one ended and many plans have already been made.

"We are working with the Forest Service to acquire a 40-foot tree from Bill Williams Mountain," said Committee Chairperson Diana Croteau, adding that help may also come from Ervin White and the Grand Canyon Railway.

There was some discussion about where the enormous tree would be this year, but members finally settled on keeping it at the Second Street/Route 66 intersection.

"We had reports last year that the tree helped attract a lot more visitors to the downtown area, which helped bring more money in to the merchants," Croteau said.

Like many Williams events, the goal ‹ which usually happens by default ‹ is for the event to get bigger and better each year.

The same holds true for the downtown tree as this time around, committee members are hoping to decorate it with even more lights and more ornaments, while adding fencing and building a sled for regular appearances by Santa Claus.

The tree lighting and dedication ceremony is set to be held Nov. 24, the day after Thanksgiving.

The phenomenally successful ice rink will return, but will be constructed facing east-to-west rather than north-to-south so that extra room can be created for patrons and spectators.

"These are preliminary plans only, but we hope to have the grand opening for the ice rink on the same day the Polar Express runs start," said Williams Parks and Recreation Director Rose Newbold. "However, I think we'll try to have it open for the community the weekend prior so that our residents and kids can get plenty of time before the tourists arrive."

Other new ideas include coaxing groups of Christmas carolers to appear regularly, getting vendors to set up hot chocolate stands at certain street corners, the possibility of getting students or church-goers to entertain passersby with short Charles Dickens pieces, more lighting for the business district and on buildings facing the Grand Canyon Railway, and adding more focus to the east end of the Route 66 loop.

"We really want to focus on the east end this year, because historically, it has been neglected," Croteau said.

Danny Ray and APS will be installing power supply resources and Croteau said the idea was to have the Williams Habitat for Humanity build silhouette facades of downtown business buildings. Both as a committee fund-raiser and drive to decorate the east loop, those facades could be sold to the respective business, who would decorate them individually.

Much of the event's success hinges on the committee's ability to raise enough funds. The more funds ‹ through donations or sponsorships ‹ the better the event can be.

Croteau said that last year with little preparation, the committee was able to raise $27,000, $25,000 of which went right into decorations and labor.

Another fund-raiser idea is geared toward the ice rink. Potted Blue Spruce trees might be sold. The committee would use them for décor around the rink and after the season, the buyers could reclaim and plant them or donate them to another cause.

At the same time, sponsorship signage alongside the ice rink will be sold as well.

This year's Festival of Lights parade, scheduled for 7 p.m. on Dec. 2, will carry the theme of "Home for the Holidays."

New Year's Eve plans include the possibility of doing some kind of drop ‹ either with a miniature train or another Williams-appropriate symbol ‹ in the vicinity of the Sultana, Cruisers, or another popular Route 66 spot.

The big push behind the Williams Mountain Village Holiday Festival of Lights Committee originally came out of a presentation by Williams City Judge Bill Sutton Jr. over a year ago to make the city a true holiday destination.

His vision centered around making Williams look like other popular tourist destinations during the winter ‹ such as Aspen or Durango ‹ where Christmas holiday magic and activity could be seen on every street corner, every storefront.

Croteau said she'd like to see Williams mirror the bright lights of the downtown Prescott area during the season. Whatever the image, its one that can only make the small town of Williams feel like the biggest place in the world to both visitors and residents.

Committee members are saying they'd like to see things such as carolers, hot chocolate vendors, Nativity scenes, and entertainers on every street corner during the Mountain Village Holiday, but admit doing so will take two things ‹ more sponsorships and more volunteers.

Committee meetings ‹ open to the public ‹ are held at 5:15 p.m. every Monday either at the Grand Canyon Hotel ballroom or the Williams/Coconino County courthouse.

For more information on doing your part for a great Mountain Village Holiday celebration, call Croteau at (928) 607-0123.

Increased turnout reported for Mountain Village Holiday
Time for Christmas as only Williams can do it
If you build it, they will come
Christmas tree to be lit on Friday
Christmas is close!
Event Calendar