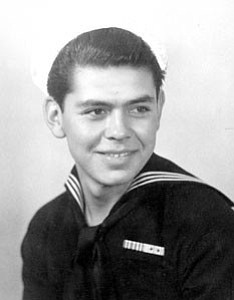 This is a photo of lifelong resident and World War II veteran John Carrillo Sr., circa 1945-1946. Retired United States Navy Seaman First Class Carrillo was recently presented an award for his 60 years of service to the Williams American Legion Cordova Post 13 and was honored for his duties in World War II.

At the ceremony, Carrillo was awarded his service pin for 60 years continuous service to the post and was recognized for his duties in the Navy.

"When you're a young man, you just bite the bullet and face whatever is coming and that's what we did," Carrillo ‹ whose rank was as Seaman First Class ‹ said of himself and his fellow servicemen.

Carrillo joined the U.S. Navy in March of 1944, and served aboard the U.S.S. Barrow.

On Jan. 27, 1945, the Attack Transport Barrow (APA-61) carrying assault troops and support equipment, got underway from Pearl Harbor. After completing training exercises in the Marshall and Marianas Islands, she arrived off Iwo Jima on Feb. 19, 1945.

Carrillo's mission during the invasion of Iwo Jima was to deliver men and equipment to the black volcanic sands of an Iwo Jima beach. From his landing raft, on Feb. 23 ‹ five days after the invasion began ‹ Carrillo saw the Stars and Stripes whipping proudly above Mt. Suribachi, the same scene that many have seen in the famous historic photos. The Barrow departed the Volcano Islands on March 1, 1945 and headed to Saipan. Then on April 1, she participated in the invasion of Okinawa. After taking part in diversionary feints, once again Carrillo began unloading the USS Barrow's troops and supplies, delivering them to the beachheads of Japanese soil.

Carrillo was honorably discharged in February 1946, and proudly wears two Battle Stars on his Campaign Ribbon.

"In regards to John Carrillo, he was a past post commander, finance officer, and has actively supported Cordova Post 13 his whole life," said current Cordova Post 13 Finance Officer Charlie Bassett. "It was indeed a great honor for post officers to be present during the ceremony. Current posts members and the entire Carrillo family are proud of all he's done."

Meanwhile, in conjunction with Verterans' Day this Saturday, members of the Cordova Post 13 will be holding a flag-folding ceremony at the Williams Elementary-Middle School tomorrow from 8:30­9:10 a.m. in the WEMS auditorium.

At 10 a.m., American Legion members will join forces with the Williams High School's National Honor Society chapter for a special patriotic ceremony honoring veterans and the history of Veterans' Day. The public is invited to attend.

"The National Honor Society usually likes to do something here at the school for Veterans' Day," said the school's NHS sponsor, Ann Wells.

In addition, American Legion members will be putting flags up around town on Saturday and will be holding a Veterans' Day barbecue and horseshoe tournament at the Legion Hall on Grant Avenue, where one raffle ticket holder could win $200.