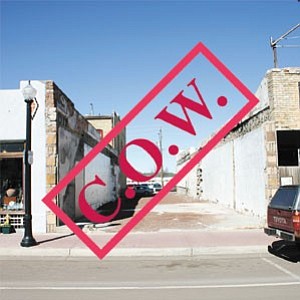 Frances Reuter, absentee owner of the empty lot between Sundancer and the Canyon Club on Route 66, was detained in Phoenix recently and forced to have a telephonic hearing with Williams City Judge Bill Sutton Jr. The city has been after Reuter for some time to answer to abatement charges and now the city has a good chance of acquiring the property.

The city of Williams could be the future owner of the empty lot between Sundancer and the Canyon Club on Route 66.

On Oct. 18, current property owner Frances Reuter was detained for a telephonic hearing with Williams City Judge Bill Sutton Jr. at a Phoenix law office immediately after a meeting with attorneys there on another matter.

"This is a real breakthrough for the city in a number of different areas," said Williams City Manager Dennis Wells.

During the span of the past few decades, Reuter has acquired properties in Williams. Subsequently, the properties fell into various states of disrepair. Some of Reuter's most notable properties have included the old elementary school along Sheridan Avenue, the Grand Canyon Hotel, the empty lot between Sundancer and the Canyon Club, and an old former hotel on Second Street between Grant Avenue and Route 66.

All but the empty lot have since been acquired by new owners and so far, only the Grand Canyon Hotel has been revitalized to a state of current usability.

City staff and council members have repeatedly said the problems with Reuter's properties include issues of public safety, aesthetics and economics.

Reuter's properties ‹ which have mostly been commercial ‹ have presented safety problems with their collective states of disrepair and are in areas often seen by both residents and visitors, creating an eyesore and public nuisance. On the economics side, some of her past properties, such as the old Second Street hotel and the Grand Canyon Hotel, sat vacant for many years. City leaders contend that those properties could have been rented out to businesses at any point and could have added to the city's economy, but often weren't.

For many years, Reuter had been issued abatement notices by the city demanding that she clean up and/or maintain her properties. The notices were ignored and eventually, she began racking up numerous criminal misdemeanor citations.

Reuter was brought into court in 2004 and ordered to pay approximately $35,000 in abatement fines for many of her past properties.

Time went by and in June of 2005, the last of the Reuter-owned properties in Williams ‹ formerly a youth hostel and the old Shen's photo studio ‹ was consumed by fire. What was once a deeply historic structure is now the empty lot between Sundancer and the Canyon Club on Route 66.

It had been reported that the building was finally about to be purchased when the fire occurred.

After the blaze, the city hired special crews to demolish what was left for safety reasons and, coupled with the work of the Williams Volunteer Fire Department, incurred well over $100,000 in costs for responding to and cleaning up the disaster.

Since then, the city has been vigorously trying to track Reuter down in an effort to recover its costs.

Once again, the city issued criminal misdemeanor citations and after a period, the city finally issued a warrant for her arrest.

"Needless to say, the city is motivated to put a lien on and obtain that property or at least receive a financial judgement on that property to offset this expense we've incurred," Wells said.

What needed to occur first before the city could pursue the issue by trial was an initial appearance with Sutton.

Williams City Prosecutor Rick DePonte said that at one point, it was believed that Reuter had a home in Phoenix. Upon discovery of the home's location however, process servers found that the home was in foreclosure and unoccupied.

DePonte also said that the town of Bisbee has the same problems with Reuter as Williams.

Most recently, Reuter was believed to be residing in San Diego, Calif., however the arrest warrant was only valid in Arizona.

But then, the city got a big break.

DePonte said that about a month ago, he learned that Reuter was to give a civil deposition in Phoenix. She missed that appearance, but it was rescheduled for Oct. 18.

"I made contact with the Phoenix Police Department's fugitive squad. They met me at the law office and we waited until she finished her deposition," DePonte said. "Then the officers detained her, I got Judge Sutton on the phone and she had her initial appearance over the telephone."

DePonte said Reuter seemed a little surprised, but was quiet and cooperative.

A Nov. 9 date has now been set for a pre-trial conference. Attorneys will try to resolve the issue there, but if one can't be reached, the matter will go to trial Dec. 15, with or without Reuter present.

While there are no details on the possible outcome of a full trial proceeding, DePonte feels the matter probably will go that way.

"Because of the amount of money we're talking about, I don't anticipate that there will be any success coming out of the pre-trial conference," DePonte said.