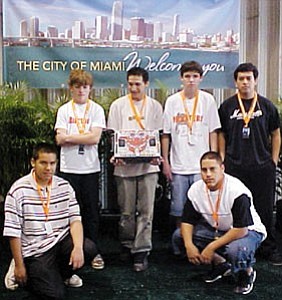 After having received well-deserved praise for winning the state competition, the Williams High School Vocational Education Slab Crabs Battle Bots team is celebrating for having gone further than expected at the April 26-30 national Battlebot IQ Competition in Miami, Fla.

"We're all very proud of them," said WHS Industrial Manufacturing Instructor Larry Gutshall. "The kids were very excited to be in the competition and they want to do it again next year, but with a bigger bot."

"I was scared to death," Hernandez said.

Both he and Meraz said the worst part was the commonly jolting take-off.

After several grueling stopovers between Phoenix and Florida, the students arrived at their final destination and went to work with registration, technical inspections, function testing and submission of documentation.

Other team members were surprised at the Florida weather, seeing it for the first time.

"It was pretty hot and humid over there," Eastland reported. "I didn't know what humid was until we got there."

Once at the event, it was easy to see that the students were going to go up against some tough competition, but the Williams boys forged ahead undaunted.

"I felt like we had a pretty good chance, because some of the engineering the other bots had wasn't that good," Meraz added.

The first few days of the event consisted of the typical registration and inspections, but Gutshall said he noted that many teams were still doing last-minute machining and drilling of their bots right up until the first rounds of competition on the second day.

The Slab Crabs, however, were prepared and needed no such last-minute work. Due to placement on the competition's eliminations ladder, the team received a "bye" (meaning they didn't have to fight) and was automatically bumped into the next day's rounds.

The third day of the event, Williams kids finally got to show the rest of the battle bot world that simplicity is best.

With their plain box design, operator Kevin Duffy and the rest of the team crunched their first opponent ‹ Coriolis, out of Miami ‹ by repeatedly pushing and bashing the other bot against the steel wall surrounding the arena. After going back to the pitting area for a quick check of the winning machine, the Slab Crabs discovered that they wouldn't have to do battle again until the next day.

Since the kids had some time left, one of the trip's advisors had arranged a two-hour sailboat ride, which all of the team members agreed was the best part of the trip.

The fourth day saw the Slab Crabs team fight a well prepared bot called "Mini TK," which sported a rotating blade at its front. Eastland was the fight's operator for the Williams team, which won again by ramming and pinching the opponent to the wall. Eastland was then able to maneuver the Slab Crab and gently tip over Mini TK, completely disabling it. The match was won by Williams in under 30 seconds.

In between matches, a short trip to the nearest beach allowed the team a little down time and the chance to snag some eastern sand and beach trinkets for keepsakes.

In the next match, the Slab Crab bot took on the undefeated "Gorilla" from Winchester, Mass. That bot would not remain undefeated, however. Operator Jesus Martinez taught that Gorilla some manners as he bashed the bot against the wall so many times, it finally broke its weapon ‹ yet another rotating blade ‹ forcing the Gorilla team to forfeit.

The northern Arizona boys had now secured themselves a place in the finals and their first match that last day produced an unfortunate loss against a bot with a spinning tool on its front. The opponent's weapon was able to repeatedly flip the Slab Crab over until it was trapped on a steel railing.

Williams' first loss bumped the Slab Crab team into the one-loss bracket, and shortly after, they were pitted against a stable mate of Gorilla named Ex Con. That bot, according to Gutshall, used a wedge-shaped design and a weapon that prevented it from getting stuck. Ex Con was able to suspend Slab Crab many times and once the Williams bot had the opportunity to fight back, too much time had already passed and judges declared Ex Con the winner.

The Slab Crab team was thrilled with their experience and can't wait to do it again next year, but will be trying to enter a bigger category.

"I think we're hoping to build a 120-pound bot next year," Eastland said, adding that they'll probably try some type of spinning weapon that can flip other machines.