Second in command on the job 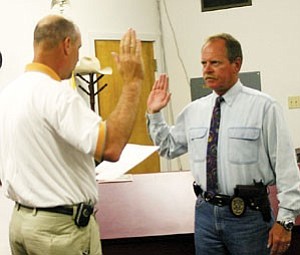 Not too long after the arrival of the Williams Police Department's new chief, Herman Nixon, another officer from Clifton has been brought on board as the new second in command at the WPD.

Lt. Mike Graham comes to Williams with 32 years experience in law enforcement. Originally from Michigan, Graham came to Arizona to be with family shortly after retiring from police work there.

Once in Arizona, he worked special assignments within the correctional system before becoming an officer in Clifton and subsequently working with Nixon for approximately two years.

"Chief Nixon called me and said he felt he'd need help up here," Graham said. "So, I interviewed with Dennis (Wells) and Joe (Duffy) and got the job."

Nixon recommended Graham to the city for the job because of similar small town experience and because the two share the same philosophy of community policing.

"One big problem is that these days, the academies are teaching new officers all of the laws and techniques, but they're not teaching them how to really talk to people," Graham said. "You may not necessarily be happy about getting a ticket, but you can come away feeling good about how you were treated."

Graham's duties will be plentiful, including taking over in Nixon's absence, and the new lieutenant will attempt to work himself into the community by either joining clubs or being involved with community affairs in some other fashion, like his chief.

Coming from Clifton, Graham said he and his family are delighted to be up in the cool pines.

"Our first trip up here, we absolutely fell in love with it," Graham said, adding that he has been very impressed with the friendly, laid-back attitude of Williams' residents.

Graham also said he felt strongly that the city had some of the better law enforcement officers he's seen and is happy to be working with them.

"I'm really excited about being here," Graham explained. "It really seems like the whole town wants to continue to move forward and has this positive thinking way about it."