Railway on the market
No price set on a priceless property 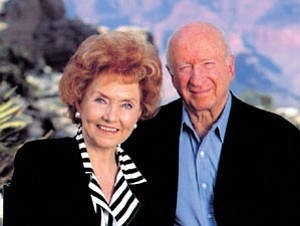 Grand Canyon Railway owners Thelma and Max Biegert enjoy time on the Grand Canyon¹s South Rim. The couple plans to leave the railroad ‹ and their legacy behind ‹ after 20 years.

For nearly 17 years, the impeccably dressed, striking couple has frequently strolled the platform of Grand Canyon Railway's Depot. The obviously devoted-to-one-another couple confidently walks amongst the passengers waiting to board the morning train to the Grand Canyon. They chat with folks of all ages, pause to admire beautiful babies and swap travel tales with seasoned travelers. Many of these passengers had little clue that  they were conversing with  Max and Thelma Biegert, the down-to-earth yet savvy owners of the GCR.

As they are preparing to become less involved in the day-to-day operations of the GCR, the Biegerts are aiming for a larger goal. The Paradise Valley couple is working on plans to preserve the Railway as their legacy.

GCR officials have signed an agreement with Peacock, Hislop, Staley & Given, Inc. and are currently pursuing strategic business options, including the possible sale of the GCR. The Railway's 469 employees were notified of the possible sale March 24.

"We've been tied to this since 1988. It was to be a five year project then and here we are 18 years later," said Max Biegert. "It's time for new money and fresh blood and for us to step away. We have an excellent group that runs this railway and I hope they stay on. We really love this project and have had a lot of fun with this. This has been a great experience for both of us. The city has been good to us. We want this to continue as a historic railway that continues to grow in the city of Williams."

"Max made the comment that if he were 20 years younger we couldn't drag this away from him. The historical aspect is very important to us," Chambers said. "And while each of us is saddened at the thought of not having Max and Thelma as the Railway's owners, we support their decision and appreciate all they have done for each of us and continue to do."

Of the Railway's 469 employees, 286 live in Williams. Other employees travel to work from Ash Fork, Flagstaff, Leupp and even as far away as Winslow. The Railway's total payroll is $9.8 million annually.

The GCR employees continue to be a priority to GCR officials.

"We will keep our employees informed and up to date and will continue to answer any questions they may have, " Biegert said.

The Biegerts' legacy began nearly 20 years ago when the couple lent money to an investor that was planning to restore the line. After a few years of no action, the two decided it was time to recoup their funds. The investor had spent the money the couple had loaned him and had no way to repay them. In the end, the unsuccessful investor transferred the north 20 miles of track into the Biegerts' name.

The Biegerts proceeded with the venture that included rehabilitating 65 miles of rail track, the remodeling of both the Fray Marcos and Grand Canyon depots and the reconstruction of Engine No. 18. The inaugural steam locomotive left Williams for the Canyon on Sept. 17, 1989 ‹ 88 years to the day after the first steam locomotive christened the same rails. Since that initial run, nearly 2.5 million people have traveled aboard the GCR. In 2005, the train transported 225,000 on the rail line.

"The first six or seven years were very difficult because of the negative cash flow," Biegert said. "In 1995, we built the hotel."

Several hotel expansions have taken place since. The Williams property now includes a 300-room hotel and RV park. The Harvey House Café is scheduled to open the fall of 2006. That café will replace the Railway's commissary, which will be relocated to a warehouse between Interstate 40 and Rodeo Road. The café will seat 190 people.

The tentative timeline for a possible sale is one to two years, including external stakeholder approvals. Once a purchase agreement is announced, final approval must be received from the National Park Service prior to becoming official since the GCR is a concessionaire of the park.

While an asking price has not been named for the Railway, Chambers says GCR officials have an estimated value of the property. He predicts selling the GCR will not be difficult.

"We anticipate many bids," said Chambers.

Grand Canyon-Northland Amusements & Entertainment, LLC is proposing to build a theme park in the Williams area. The preferred proposed site for the 480-acre covered theme park surrounds Gonzales Lake, located north of Interstate 40 near exit 163. The land is currently owned by GCR.

Morgan could not say when the deal would be closed.

"We do not want to put out a false timeline," he said.

Until two years ago, the Biegerts never removed profits from the GCR. During the last two years, Biegert has utilized profits only to pay income taxes incurred by the business, Chambers said.

"Max was writing checks left and right before the company generated a positive cash flow eight or nine years ago. Every nickel that the Railway has generated has been plowed right back into the company," Chambers said.

Revenues have increased 73 percent and Chambers projects an additional 67 percent increase during the next four years. An estimated 300,000 passengers are expected to ride the GCR's rails in 2009. The increase in ridership excludes special train runs such as the Polar Express. GCR officials expect 77,000 seats to sell for this year's Polar Express run and more than 20,000 seats have already been sold.

"The hotel growth and extreme increase in passengers/ridership corresponds with customers in the hotel. We need more hotel rooms," Chambers said. "With 300,000 passengers expected by 2009, we must bring on another hotel by 2008."

When contemplating the possible sale of the GCR, officials began to examine a master plan that includes 100 acres east of Grand Canyon Boulevard.

"We took the property starting at Grand Canyon Boulevard and headed east. Professional planners took a look at what we could do with that area," said Bob LaCivita, executive vice president of GCR.

The property will include a 200-room hotel along with ample parking and retail space that concurs with current city of Williams ordinances and standards.

"This is all based on future need. Two-hundred rooms are going to be imminent," Chambers said.

Immediate plans include the construction of a warehouse and laundry facility between I-40 and Rodeo Road. GCR officials hope to relocate to the warehouse from the current one ‹ which will become The Harvey House Café later this year ‹ within 90 days. Once the warehouse is relocated, renovations can begin on the café.

Eventually employee dormitory-style housing ‹ similar to dormitories offered at the Grand Canyon by Xanterra ‹ will be constructed near the warehouse. Plans call for 688 dormitory rooms along with 808 parking spaces.

"We all agree that there is a shortage of housing and we can see in the future a need for employee housing," LaCivita said.

While change is imminent, the GCR continues to prosper. At the end of February, Chambers said revenue was up 53 percent. During fiscal year 2005, the Railway paid $150,000 in property taxes to the city and $984,000 in sales and bed, board and booze taxes, representing 30 percent of all city property and sales tax receipts.

"The Grand Canyon Railway's contribution to the financial health and stability of Williams cannot be underestimated. Max and Thelma will be sorely missed. Once the railroad is sold we can only hope and look forward to the new ownership being as visionary and community minded as the Biegerts," said Williams City Manager Dennis Wells.