Preparing for the fire
Experts say it's not 'what if' on future fire, but 'when' 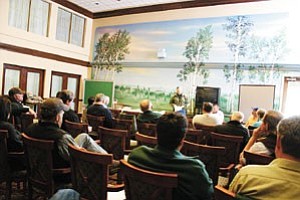 Imagine Bill Williams Mountain and the surrounding hills bare of trees. Imagine our watershed being destroyed by post-fire silt and your home or business up in flames. Imagine a subsequent economic impact so severe, it would take years to recover.

It's wildfire ‹ a danger that has been discussed many times throughout the drought-ridden seasons, and one that is closer to being a reality than many Williams residents might think.

A city-sponsored March 17 wildfire threat meeting brought several contributing agencies together ‹ such the Forest Service, the American Red Cross, local law enforcement, local fire departments, the State Land Department and others ‹ to discuss evacuation procedures and the resources that would be available to the city in the event of nearby wildfire.

"We're in an extreme fire hazard," said Councilman Cary Price, who helped organize the meeting. "That's been one of my worries. It'll happen one of these days and if we don't have those defensible spaces before it gets to town, then it could burn the whole city down."

Price mentioned he had practiced with others on a tabletop wildfire model of the city, and that despite their best efforts, the group could not keep up with the simulated fire once it had started.

Forest thinning and forest-wide fuels reduction programs have been agreed upon as the primary way to lessen wildfire threat. The Forest Service and other contributing agencies, however, realize that those programs will take years to complete.

In the meantime, experts urge area residents to clear their properties of as much burnable debris as possible. Rural Communities Fuel Management Partnership Director Art Matthias reminds the community that property owners can get in on defensible space clearing projects around their homes/businesses quite easily. There are sponsored programs offered in conjunction with Coconino County, including a cost-deferred housing rehabilitation program for those who qualify that has a special fire safety sub-program.

"One thing we can do is encourage people in neighborhoods to get in the programs," Matthias said. "The money's not going to last forever."

The effect of a wildfire roaring through Williams would be multi-fold. First, the natural beauty that is currently attracting outside development would be marred and a lot less attractive to developers. A scorched mountaintop would also put a stranglehold on a substantial portion of tourist visits, leading to a loss of revenue for businesses and the city.

Secondly, until trees and other vegetation grew back, the soil of the burned areas would be reduced to silt, which allows for uncontrolled runoff of much-needed water. The silt would then fill the city's reservoirs, rendering them nearly useless.

Thirdly, communications towers on top of Bill Williams Mountain could be affected, and finally, the economic impact overall would throw the city into a spiral that won't be easy to climb out of. Everyone, from the common citizen to the richest business owner, would be severely affected.

To put perspective on the severity of the problem, local firefighters at the meeting said that with the severe drought, a wildfire could spread through town so quickly, that crews wouldn't be able to hook up to fire hydrants fast enough.

Though a severe wildfire in the immediate area can have a direct and devastating on structures within town, the reverse also applies. A structure fire, especially one close to burnable forest materials, can spark an out-of-control forest fire.

After introducing themselves and a brief discussion on current conditions, attendees then began discussing evacuation plans and the resources that could be available.

In the event of a major fire, the city starts communicating immediately with its residents, pointing them to the safest primary evacuation centers ‹ either the Williams High School or the Williams Elementary-Middle School ‹ when the moment is right. Communications would be completed through radio/television announcements if time permits, or on a door-to-door basis.

Charlie Zurcher, representing the Red Cross, said that the city should also set up alternate safe centers, such as the Bob Dean Rodeo Grounds barn ‹ a possible command site as well ‹ or Flagstaff or Ash Fork schools.

At the same time, the city and other agencies communicate with each other to start bringing in personnel and equipment.

Kaibab National Forest Fire Manager Dave Mertz agreed with Price and others on the urgency of the issue, even though he was not aware of any fire danger closures or restrictions on the KNF currently. Mertz said that in a major wildfire, his agency can provide personnel, firefighting vehicles, incident management teams, and even firefighting aircraft.

At the state level, available resources could include air tankers and strike teams while both the county and state could provide state of the art mobile communication command center vehicles.

Another important communication tool is also currently being put together by the state. Arizona 2-1-1 Online is an Internet bulletin and news flash site specifically made for emergencies. Information is traded between several agencies and posted 24 hours per day as emergency situations occur.

Copies of the city's disaster mitigation and emergency evacuation plans can be obtained at city hall, 113 S. First St.