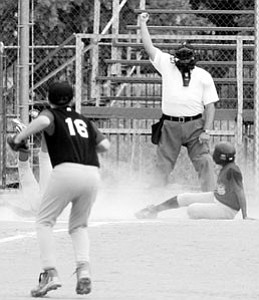 Despite the tumbles, a Williams Little League Wildcats player is called out at home plate at one of the June 7 WLL tournament games against the Williams Storm. The Storm came out champions overall with the Williams Scrappers as runners-up.

The nearly-undefeated 15-1 Storm team took the championship, having gone through several other teams throughout the week.

By June 10, the Storm was tops in the winner's bracket and had to be beat twice by the secondary bracket top team ‹ the Scrappers ‹ to lose. They didn't.

In the first of two Saturday games, the Storm suffered their first defeat of the season to the Scrappers, 9-10.

The Storm came right back, however, to claim the season championship in a 12-1 second game victory shut down early on the 10-run rule. Jonson Curry pitched the win with an impressive 13 strikeouts and Coach Herman Nixon said the team exercised superior hitting.

"The season went well. We had excellent participation from all the kids," Nixon said, adding that he hopes to have an even bigger and better season next year.

Meanwhile, Scrappers Manager Kevin Perkins is proud of his team's ability to take a game away from the league's only undefeated squad at Saturday's finals.

"Every single player on our team was hitting ‹ it was awesome. It was their best game ever," Perkins said.

The 15-4 Scrappers had beat Ash Fork June 8 and the Wildcats June 9 to get to the finals and face off against the Storm.

Perkins said his kids played hard and that it was the best season he's coached so far.

The Wildcats also have a lot to brag about this season with basically an even record ‹ a notable accomplishment with what Manager Edgar Brown admits was a fairly younger team.

"My kids did everything a coach could ask for," Brown recalled. "They played hard and they were a wonderful bunch to play with."

With the end of the season, coaches are now assembling All Star teams to play against other community leagues.

The 9-10 All Stars will have their first game in Prescott behind Yavapai Community College on June 21. The older 11-12 All Stars will be announced June 15.