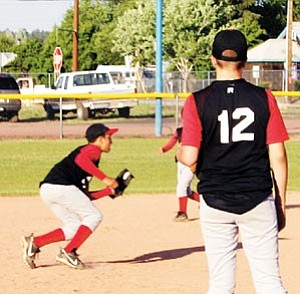 Williams Little League Storm player Jonson Curry, No. 15, scoops up a grounder to assist for the out at the June 2 victory over the Parks Pirates. WLL majors teams are in tournament action all this week, culminating with 10 a.m. championship games Saturday at Cureton Park.

The Williams Little League Majors category teams are now in the thick of the season-ending city tournament playoffs this week.

Games are scheduled for 5:30 p.m. and 8 p.m. nightly with championship finals starting at 10 a.m. on Saturday. All games are at Cureton Park.

A double eliminations format ensures each team will play at least twice.

In their final regular season games last week, the undefeated 12-0 Williams Storm team beat Ash Fork on May 30 in a 15-0 shutout.

Alexis Soto got the win on the mound and Coach Herman Nixon said every player was hitting well.

"It's been a great season," Nixon commented. "We've got some great players as evidenced by our record. They're all awesome ‹ we're very proud of them."

On June 3, The Storm toppled Grand Canyon 15-6 with Kohl Nixon on the mound.

Coaches were sure to mention the efforts of player Leo Lopez, who hadn't started all season, but went 3-3 at the plate that day.

At the beginning of tournament play Monday night, the Storm beat Ash Fork 6-5, but not without having to work for it. The Williams kids were down by two going into the sixth inning, but came back to win with two back-to-back in-field home runs by Kohl Nixon and Jonson Curry. Ivan Ruiz pitched the win.

Moving on, the Williams Wildcats are also proving themselves tough to beat, having won against the Scrappers Saturday with a whopping 11-1 victory.

Coty Baxter pitched the win and Coach Jeff Brownlee had nothing but good to say about the kids.

"I really can't single one person out," Brownlee said. "The whole team hit the ball well ‹ it was good to see."

Meanwhile, the Williams Scrappers came away with a well-deserved 7-6 win against Ash Fork May 30.

The game was called by officials in the fifth due to an evening lighting problem. Colton Baxter pitched the win and at the plate, Andrew Hodges and Garret Pettit both scored two runs.

Williams Little League Minors and T-ball teams have just started their seasons as well. Look for coverage of those games in upcoming issues.