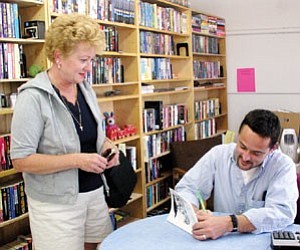 While the book has been completed for some time, it is hot off the presses ‹ printed just a little more than one week ago ‹ and a limited number is available exclusively at Whistle Stop Books, 117 W. Railroad Ave. Whitehurst offered his book during a book signing at Whistle Stop May 26-27.

The title of the book is "Legends, Ghosts & Superstitions of Williams and Grand Canyon." Whitehurst penned the illustrations in the book.

"I tried to make the book more fun than spooky to capture a wider audience. Some stories are less believable than others," Whitehurst said.

Whitehurst reminds readers that he did not conduct any in-depth investigations into the stories he shares in his book.

"These are stories that have been passed around town for years. Some stories are longer than others. Some are short due to a lack of information," he said.

Whitehurst's stories came from many area residents from a wide variety of people and places.

Whitehurst has shared some of the stories in previous editions of the News and Flagstaff Live. While the book has been complete for some time, Whitehurst waited for the right time to publish then release the book. He says he always knew that he would release his book at the beginning of summer.

"During the summer months a lot of people are in town. With more people in town, the chances are better of selling more copies," Whitehurst said. "The ghost tours that are to be offered in town will hopefully generate interest."

One of the stories featured in the book includes a sighting of a cow with a woman's head.

"This is an older story that came around in the '60s or '70s. Two little girls vehemently said that they saw this thing come out of a barn near Fulton. Whether this is true or not, it still makes a good story," he said.

Other stories feature the wailing woman, the woman in the flowery dress at the Grand Canyon, the country club suicide ghost and the ghost that haunts the Red Garter Bed & Bakery. Legends and superstitions pertaining only to the southwest are also included.

"Since I've done the book I've heard about 10 more stories that are not included, so I may do an update of the book at some point," Whitehurst said.

A resident of Williams since the mid-1990s, Whitehurst began exchanging stories with area residents. The idea to write a book came to him several years ago when he realized that no one had written a similar book in this area.

"Depending on how much fun I have, I may write a similar book about the Flagstaff area," he said.

Whitehurst welcomes new stories of ghosts, superstitions and legends. He can be reached via e-mail at whitehurst1@peoplepc.com.