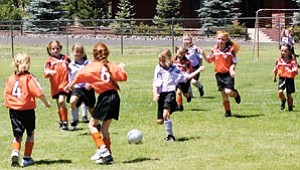 Williams AYSO youth soccer teams ‹ such as the U6 girls team from last year pictured above ‹ are playing currently, but only have three home field appearances scheduled for this year. The next one is on July 22 at the Williams High School fields.

The Williams AYSO youth soccer league kicked its season off June 24 with games in Flagstaff.

This year, the league features six Williams teams ‹ the U6 boys Red Fireballs, the U6 boys Red Rockets, the U6 girls Blue Angels, the U8 boys Roadrunners, the U10 boys Blue Tigers, and the U12 girls Jokers team.

On July 1, the Williams teams opened at home with six separate games. The Red Fireballs, coached by Frank Kramer, smeared the Flagstaff Orange Lightning with a score of 8-1. Little Frankie Kramer scored all 8 goals. Scores for the other two U6 teams were unavailable.

The Roadrunners, coached by Gumaro Gutierrez, tied their Flagstaff opponents, while the Blue Tigers, coached by Anderson Yazzie, lost to the Flagstaff Blue Eagles 1-5 with Devon Orozco scoring the lone goal.

The Jokers, coached by Christina Peterson, were up against the Rush from Flagstaff and won with a score of 4-2. Aidan Grantham, Krystol Yazzie, Ivan Ruiz and Jordan Pettit each scored a goal.

On July 8, the teams were at home again on the fields at WHS. The Roadrunners came away with another tie against their Flagstaff opponents, 4-4, but the Jokers beat the Flagstaff Wolves with a score of 6-5. Aidan Grantham scored four with Karrina Rotter and Krystol Yazzie scoring one goal each. The other four team scores were not available at press time.

The Williams teams will be playing in Flagstaff this weekend, but will be back on their home turf again on July 22 with games beginning at 9 a.m. Come on out and support your local AYSO kids and enjoy a fast-paced soccer game.