Williams All Stars being selected for tournament play 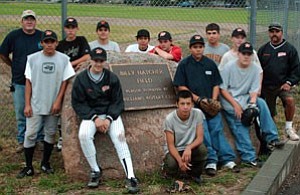 Players from many different teams within the Williams Little League are being selected for All Star teams that will be playing against other leagues in upcoming tournaments.

The District 10 13-14-year old All Stars have their first double-eliminations tournament game today as well in Prescott at 5 p.m. against the Camp Verde team.

The District 10 Williams Little League 9-10-year old All Stars have played their tourney games and since returned home.

Their first game was played on June 21 against Sedona, a contest coach/manager Herman Nixon says was a heartbreaker.

Though pitcher Kohl Nixon issued 10 strikeouts, the Williams team lost in a close1-0 battle. Sedona had reached base on an error and one of two hits in the fifth scored the game's only run.

Nixon said that kind of close heartbreaker can be tough on the players and is probably why Williams was knocked out the next day in a 15-4 loss to Prescott Valley.

That, however, doesn't discourage coaches. Nixon said he was delighted at how the kids performed.

"We're proud of all the kids ‹ the practiced hard, they played hard and we're looking forward to a great season next year with a lot of those kids returning," Nixon said.

The News extends the community's pride to all the Williams Little League players. Check out upcoming issues for more details as they become available.