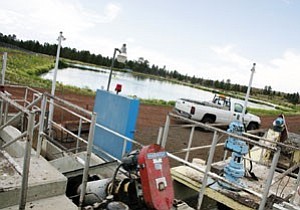 Representatives from Phoenix-based engineering firm Camp Dresser and McKee Inc. made a presentation urging council members to go with a one million gallon-per-day oxidation ditch design for the new facility.

"That's what we're recommending to the city is that you venture forward and actually build a 1-mgd plant at this time," said CDM's Marty Craig.

He explained that most regulating agencies dictate that cities build plants exceeding current capacity so they can accommodate projected growth.

The city has been in need of building a new plant for some time.

The Arizona Department of Environmental Quality demands that the effluent post-treatment water coming out of the plant be of B+ quality. According to Williams Water Department Superintendent Ron Stilwell, the city's current plant isn't getting the job done.

"Right now, our existing plant is having a hard time meeting the B+ requirements, so we have to upgrade it to meet those state requirements," Stilwell said, adding that meeting future population numbers is also a factor.

The ponds house algae that actually eats much of the waste material. Once the leftover water is treated to B+ quality, which is non-potable, ADEQ permits allow the effluence to be sent to the Elephant Rocks Golf Course, where it is used to water the greens.

Unfortunately, the current effluence is so full of algae, it is starting to damage the golf course sprinklers.

To upgrade the plant so it can produce cleaner B+ effluent water and to allow for future growth while remaining cost effective, CDM recommended the oxidation ditch design.

In the new design, things will start from the south with upgraded headworks near the tower where the current facility exists. From there, the wastewater will be sent to the oxidation ditch ‹ a pool that, not unlike the current ponds, uses bacteria, and mechanically stirs the material and bacteria into action.

After the ditch, the material goes into clarifiers for further treatment, and back out to the golf course now that it is cleaner water. Sludge from the oxidation ditch is removed on a regular basis, dried, compressed and sent to landfills.

The city's current aeration ponds will be kept as storage for the effluent water during the winter months.

At the council meeting, a resident asked if the B+ water can be used anywhere else, such as for fire hydrants used by the Williams Volunteer Fire Department. Though an intriguing idea, the answer was no for two different reasons.

Number one, current ADEQ permits allow the effluent water to be used only on the golf course and nowhere else. Number two, the city's hydrants are tied in to the potable water lines. Since B+ water is not drinkable, all new separate lines would have to be built for the hydrants.

It was discussed, however, that with new permits and little trouble from the ADEQ, the effluent water could also be used for construction.

Councilman Andrew Hamby asked about noise and odor pollution in regards to nearby residents. Both Councilman Pat Carpenter and the CDM representatives said that as long as the plant is operated correctly, odors and noise are typically not a problem. Occasionally, odors may arise when sludge is removed.

Craig estimated the cost of the new plant ‹ which will be built to accommodate further future upgrades ‹ would probably be around $10 million.

WIFA is a state run agency that funnels money through low interest loans to municipalities for water/infrastructure needs. Each fiscal year, the city sets aside a portion of its revenues and budget for debt service to WIFA and other loans.

The project for the new wastewater plant is already in the design phase. Being constructed on a design-build basis, once the engineers at CDM have the design 30 percent completed, they will start building. According to CDM, that could be within the next 90-120 days.