Girls win one of four at Salt River tournament 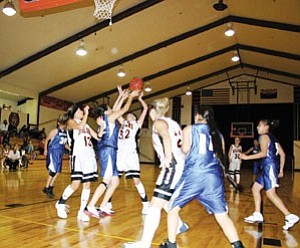 Lady Vikings No. 32, Breanne Schulte, fights for control of the ball with help from No. 13, Alyssa Dennison, at an earlier season game.

The Williams High School Lady Vikings varsity basketball team did slightly better than the boys when they traveled south recently for the Dec. 28-29 Camp Verde Cowboy Classic tournament, winning one out of four games.

"We were ahead at the half 20-17," said Lady Vikes Head Coach Kristi Fredrickson. "We just went flat in the second half."

The girls were also plagued with fumbling and allowed 35 turnovers.

"If Michelle (Sandoval) is rebounding for us, we generally do pretty well," Fredrickson added.

Later that same day, Williams lost to Alchesay, 32-64. The girls only scored two points to Alchesay's 19 in the first quarter ‹ a deficit too great to come back from.

"The turnovers killed us once again and Alchesay is tough ‹ I've heard they're one of the better teams in 3A," Fredrickson said.

Alyssa Dennison and Sandoval showed aggressiveness in rebounding with nine and seven, respectively, and the team showed good hustle with 19 steals and seven assists.

Another loss ‹ this one to Mingus Mountain, 38-47 ‹ hit the girls on the tourney's second day.

"We actually played a little better in this game," Fredrickson said, explaining that the team cut the turnovers down to 23.

Sandoval led the team with 16 points and was 10-14 from the line and Pettit was mentioned for numerous steals.

Finally, later that day, the girls came away with a 55-28 win against a slightly less-skilled Mayer team.

The Lady Vikes only had five turnovers in the first half and racked up 26 steals for the game.

Breanne Schulte topped the scoreboard with 14 points all from the field while Sandoval went 4-6 from the line. Pettit was mentioned again, this time for rebounding.

"Overall, it was a good experience for the girls," Fredrickson said of the tournament, admitting that it's hard to play during holiday breaks as team members are often thinking of other things. "I'm hoping when we travel this weekend, we do well."

The girls will go with the boys on the road to battle Many Farms Friday and Pinon Saturday.

Lady Vikes up one, down two in preparation for conference
One up, two down for boys and girls at season start
Lady JV team stomps all over St. John's
Shaky refs frustrate coaches
Final Four for Lady Vikes