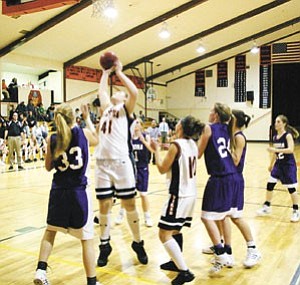 The Williams High School Lady Vikings basketball team had a rough week going 1-5 between the JV and Varsity squads.

Dec. 15 brought in the first conference game of the season for the Lady Vikes versus the Valley Sanders Pirates. The JV squad put up a good fight, but dropped the game 65-31. The presence of a newer, less experienced varsity girls team reared its ugly head as they fell 68-43.

Dec. 16 saw the second official conference game of the season, this time on the road at St. Johns. The JV girls played an excellent game and came away with the 44-36 win.

The varsity girls team effort was not there, unfortunately, as they fell to the Redskins 69-35.

The Lady Vikes are averaging 24 percent shooting from the field, they had a negative steal-to-turnover ratio averaging 25 turnovers per game to 16.5 steals per game.

The Lady Vikes will be off getting some more practice hours in until the Dec. 28-29 Christmas Tournament in Camp Verde.

Annual Holiday Basketball Tournament ‹ the girls
Shaky refs frustrate coaches
Lady Vikes up one, down two in preparation for conference
One up, one down for Lady Vikes
Lady Vikes 1-3 at tourney
Event Calendar