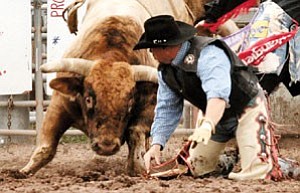 Dave Sanders of Las Vegas gets a good look at the bull that threw him off during the bull riding competition at the 2005 Williams Labor Day PRCA Rodeo. Saturday through Monday, catch rodeo action live beginning at 1 p.m. daily at the Bob Dean Rodeo Grounds.

Once again, it's time to slap on those chaps and tie on those spurs for the return of the annual Williams Labor Day PRCA Rodeo Friday through Monday.

One of the city's most well-attended yearly events, the rodeo typically delights upwards of 4,000 spectators and Williams Labor Day PRCA Rodeo committee members are hoping for even more.

The fun begins at the Bob Dean Rodeo Grounds arena at 7 p.m. Friday with a divisional tour barrel race.

The 2006 parade theme is: Preserving Our Western Heritage.

"Usually, we don't include any motorized entries but this year, we're opening it up to all kinds of entries," said committee member Peggy Dean.

The parade will, as usual, feature numerous rodeo queens from all of Arizona, including current Miss Rodeo Arizona ‹ Elizabeth Scott.

Between performances, crowds will be entertained by the rambunctious antics of new Williams Labor Day PRCA Rodeo clown Dwayne Hargo, and performances of the Quadrille De Mujeres horseback drill team.

"It's great," Dean says. "It's just a lot of fast-paced action on horseback."

Each day's performances will kick off with a grand entry ceremony featuring Dean, her granddaughter Carly Billington, the Quadrille De Mujeres riders and ‹ though unconfirmed ‹ possibly even a few of the Bill Williams Mountain Men.

In addition, each day's performances will feature a calf scramble where attendees age six and younger are invited to gather on the arena floor and chase down a ribbon on the calf's tail for a prize.

Numerous vendors featuring everything from clothing to fine art will be on hand and the Williams Kiwanis Club will be providing food and beverages while manning the rodeo grounds' cook-shack. Other clubs and volunteers, such as members of the Williams High School athletic teams, will be assisting as well.

With more than 240 competitors last year and most likely the same or more this year, the winners' payouts could top the $30,000 mark.

Triple V will be the event's rough stock provider and fans may also see some NFR stock as well.

Single-day admission is $10 for adults, $5 for children under 12. Adult three-day passes are available for $24, with children's passes available for $12. Tickets can be purchased early at the Williams-Forest Service Visitor's Center and as an added bonus, seniors over the age of 62 get half price on Labor Day.