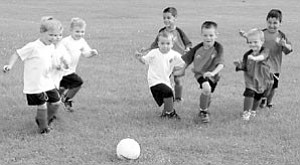 On Aug. 7, the two Williams U6 boys teams faced off at home field in Williams. The Red Fireballs finished their season with an exciting game against the Red Rockets. For the Red Rockets, Caleb Burlington, Cole Cameron, Raven Christiansen and Hunter Dearden showed off their ball handling skills and Kai Grumbine knocked in a couple of goals.

The Williams U6 Red rockets finished up their season against the Flagstaff Black Snakes on Aug. 12. It was a fun game with scores by Christiansen and Grumbine.

Burlington, Cameron, Dearden and Max Schramm all played excellent defense, and Haiden Kendall stopped by to cheer them on.

The undefeated U12 Co-ed team, the Jokers, were up against the Great Purple Fanta Girls at Sechrist School in Flagstaff, Aug. 12, winning with a 3-0 score.

The tension was high and the players were ready to defend their title. The game started off slow with both teams aggressively working their defense, but then in the last two minutes of the first quarter, Krystol Yazzie dribbled the ball down and took a shot scoring the first goal for the Jokers.

The second quarter was just as tense with both teams defending their goals, but Karrina Rotter managed to dribble the ball past three Flagstaff defenders and found the net for the team's second goal.

The third quarter was a little shaky with the Purple Fanta team spending most of the time down in goal territory against Williams defenders who managed to keep the Purple Fanta team from scoring. By the fourth quarter, the Jokers were a little tired, but were ready to defend their title when Tana Schulte scuttled down the right side of the field avoiding defenders and managing to pop it in for another goal.

Coaches said it was one of the hardest the kids have played. The Fanta Girls were playing "gang ball," which means every time a Williams player had possession, a group of Flagstaff players were crowding the offense. The Jokers, however, managed to play like a team and it was one of the best games the team has played this season.

This year has been a trying one for the team, but with lots of hard work, it's paid off and the team is currently undefeated.

The Jokers will play one more game for the season at 11:30 a.m., Aug. 19, in Flagstaff at Sechrist School. Scores for the U8 and U10 teams were unavailable at press time.

The Red Fireballs and Red Rockets enjoyed a pizza party, complements of Williams AYSO, funded by the donations of local businesses and individuals. A special thanks goes out to Chuck Coleman at the Pizza Factory for the great deal on pies. A special thanks also goes out to all the parents for making this AYSO season a success by taking time out of their very busy schedules to support the teams.

AYSO is an all-volunteer organization that includes coaches, referees and organizers. Thanks also to KarreJo Santana for coordinating Williams AYSO and making it all possible.