Williams AYSO soars above the competition 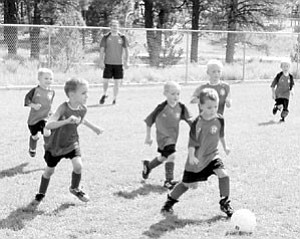 Williams U6 players Caleb Burlington, Tustin Lann, Kai Grumbine, and Max Schramm battle for the ball and the points.

The Williams AYSO teams were on the road again this past weekend. The teams have been playing in Flagstaff for the past two. The U12 Girls team, the Jokers, are undefeated and going strong. They are unstoppable, with great defense paying off.

"They are playing more like a team and are just unstoppable." says coach Christina Peterson.

On July 22, the Jokers were up against the Flagstaff Orange Crush. The Jokers crushed them with a score of 7-0. Aidan Grantham and Danielle DeClermont snagged the net each with one goal in the first half while Krystol Yazzie scored two goals.

The second half was just as exciting with Grantham hooking up with two goals and Karrina Rotter scoring one.

The Jokers have a make up game to schedule and hopefully that game can be played here in Williams, so you may have one more chance to come out and watch our U12 Jokers. The U6 Boys team, the Fireballs, were up against the Green Geckos on July 22.

The Fireballs scorched their opponents with a score of 8-3.

David Lazono and Frankie Kramer scored four goals each. The Fireballs were then up against the Flagstaff Sharks on July 29 and came home winners on that day as well. Lazono scored a goal, with Kramer scoring four for his team. They will also be back in Flagstaff the rest of the season, but will have a make up game to play here in Williams. More information on that match and the U12 will be forthcoming.

Meanwhile, the Williams U6 Red Rockets beat the heat of a late afternoon game in Flagstaff July 29 by scoring multiple goals against a challenging Flagstaff Red Dragons team. Quick-footed Tustin Lann kept the pressure on with two good runs on goal, while Caleb Burlington, Kai Grumbine and Max Schramm knocked in some spectacular goals.

Scores for the other Williams teams were unavailable at press time.