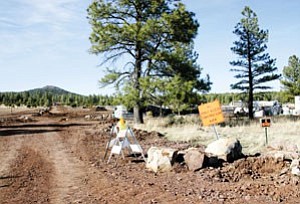 Highland Meadows North is only one of many subdivisions approved by the Williams City Council in the past year. With the rise in development, the city has also seen a large influx of realtors and many are asking, how many more brokers can the area handle?

As many residents and non-residents already know, news of theme parks and the drive of those who are leaving big city life for something better has prompted mass interest in the development of available land in Williams.

That spike in development has also caused a subsequent flood in the arrival of realtors who are realizing that Williams and its surrounding communities are a gold mine.

A 2002 printing of the Williams-Grand Canyon Cham-ber of Commerce Business Directory lists only eight realtors and realty-related business, such as title agencies, as chamber members. The latest, printed in July, lists 21 different real estate-related businesses as members ‹ nearly a 300 percent increase.

In April 2005, city leaders predicted that within the next 5-10 years, Williams residents could see another 1,100 units built in addition to homes currently in place. A recent report from the Williams Water Department and the city's planning office says that currently, 742 new lots have been approved for water. Of those, 630 have yet to receive building permits.

Many are asking if the influx of real estate brokers is too much. The answer is both yes and no.

Rushton said the competition is also good for the realtors themselves because it forces them to provide increased service, which in turn brings in better business.

Other area realtors agree, and most admitted that some of the new realty offices will most likely fall by the wayside eventually because there's only so much land to go around.

"I'm a firm believer in competition," said councilman and chamber board member Michael F. Vasquez. "Competition is always good, but when you've got that many out there, something's got to give."

Diana Croteau, of Russ Lyon Realty, said that recent Arizona statistics indicate as many as 87 percent of newly licensed brokers in the state quit the business after their first year. She predicted that the ones who survive will probably be the ones with strong ties in the community.

Bill Miller of Williams Realty said he embraces the competition for the same reason as others, but warns that too much may result in an over-inflation of some pricing.

"With more realtors competing for the listings, you might find they'll start promising the client that they can sell it for a higher price," Miller explained, adding that once a property sells for more, it sets a new level for similar units.

Miller went on to say that though that might occur, the effect probably wouldn't last very long.

Croteau added that another downfall to a market with too many realtors is that some of those brokers are coming from places outside northern Arizona and don't know the intricacies of selling raw rural land. That could potentially hurt a novice buyer who might not know what buying rural land entails, such as land usage, zoning, or water availability.

At the same time, however, city leaders and chamber of commerce officials are excited at the influx, simply because it is yet another sign of an upwards economy.

"We like this because it means interest is peaking and the city is growing," said Chamber President Donna Eastman. "Realtors are great for business because they talk with each other and their clients. That opens up a dialogue that gets outside business owners interested in seeing what Williams has to offer."

As Miller offered, only time will tell as to whether or not the Williams market can handle more realtors and who will drop off if it can't.