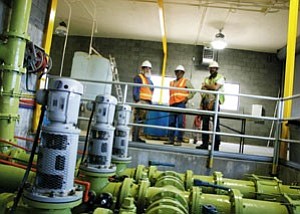 Rick Kohl, supervisor/foreman Richard Tinney, and Remo Willis of Technology Construction stand over a portion of the newly completed chemical building at the Williams water treatment plant. The plant¹s remodeling should be complete by the end of May.

Williams' newly remodeled water treatment plant is close on its way to being completed.

Stumbling blocks, such as omitted parts, change orders and inclement weather have delayed the project, but Williams Water Department Supervisor Ron Stilwell says the plant could be done by the end of May.

The project has had an occasionally climbing price tag that is now at nearly $2,000,000 and includes a new chemical building, new sediment basins, new automated systems, the replacement of much of the plant's outdated piping, and more.

Once completed, the work will boost the plant's treatment capacity from 800,000 gallons per day to 1.5 million and water quality should be increased.

Unfortunately, Stilwell revealed at a March city council meeting that with development the way it is right now, the increased capacity may still not be enough.

"Basically, with every approved subdivision we have right now, that equals our 1.5 million capacity," Stilwell said, explaining that anymore approved development will require the city to install a chlorination system and pipeline from the Dogtown well field.

Such a project could cost approximately $2 million and is one the city leaders are planning for after the completion of the city's wastewater treatment plant.

Currently, the city services about 1,200 water customers and Stilwell's latest report indicates that another 742 lots have been approved for water, 630 of which have yet to receive building permits.

At the same time, the city has contracted out to a new company for some more testing for acceptable well-drilling spots along the Mesa Butte fault line south of town. Hydrosystems has been awarded a $30,000 contract to cover two areas with a method called electrical resistivity, which has gotten rave reviews from many who have been able to drill productive wells.

The city is still in talks with westside developer, The Keethler Company, who has promised to cover the cost of a new well and later turn it over to the city once their development is completed.