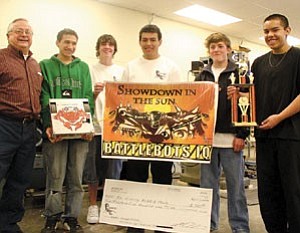 The victorious Slab Crabs proudly display their prizes. Pictured from left is instructor Larry Gutshall, Aaron Buchmoyer (holding the base of the winning battlebot), Kevin Duffy, Jesus Martinez, Andrew Eastland and Juan Hernandez, holding the trophy. Team member Rene Meraz is not pictured. The Slab Crabs will represent Arizona in a national battlebot competition later this month in Miami, Fla

When three students climbed into a van at 5 a.m. April 1 driven by Williams High School instructor Larry Gutshall, they had no clue that within 11 hours they would be named the Arizona State Champions of the Showdown in the Sun BattleBots IQ competition.

The first-ever competition in Arizona was presented by BattleBots IQ and the Arizona Tooling and Machining Association. The competition was hosted at the East Valley Institute of Technology in Mesa.

The WHS team ‹ known as the Slab Crabs ‹ will represent Arizona in a national competition set for March 26-30 in Miami, Fla.

The students ‹ Kevin Duffy, Andrew Eastland and Jesus Martinez ‹ traveled to Mesa for the competition. The contest was open to middle school through college and vocational students. The Williams students faced stiff competition ‹ technological schools with ample funding and teams consisting of 10 or more members. Other teams created multiple battlebots. In all, there were approximately 20 battlebots. The Williams team had only one and it was not operational the morning of the contest.

"Our team had no chance to practice. The bot couldn't even be tuned up," Gutshall said.

After arriving at the competition, two other teams lent assistance by loaning Williams a radio receiver and a set of crystals.

"Then we won the state competition by beating the other teams," Martinez said.

The team enjoyed victory in five of six matches.

The Slab Crabs consists of six members and includes Aaron Buchmoyer, Juan Hernandez, Rene Meraz, Eastland, Martinez and Duffy. It is Gutshall's hope that all six young men will attend the national competition later this month.

The Slab Crabs had eight weeks to prepare for the competition. A large equipment donation from Jim Johnson of Johnson Diamond Tool made the creation of the bot possible.

"We could not have done this without Jim (Johnson)," Gutshall said.

The value of Johnson's donation ‹ approximately $40,000 ‹ proved invaluable to the WHS industrial manufacturing class. In honor of Johnson, the WHS team named themselves the Slab Crabs after one of Johnson's creations.

Johnson maintains the reason he donated the equipment and components is for the future of Williams' youth. However, Johnson was quick to point out that it was Gutshall's dedication to his students and the world of technology that prompted the donation.

"Larry (Gutshall) has a heart for these kids and it shows," Johnson said.

Johnson has been donating his time to the vocational education program. He has enjoyed it so much that he is scaling back his community service to concentrate his efforts on the young people enrolled in technology classes at the WHS.

"I can do a lot more good there than anywhere else. Plus it's a lot of fun," Johnson said.

The April 1 Showdown in the Sun was a 15-pound competition, meaning that the battlebots had to weigh 15 pounds or less. The battlebots are radio-controlled vehicles, making them different than robots that can be programmed for various functions.

"We were the underdogs and we wanted to win," Martinez said.

The team members agreed that the competition was a bit intimidating. Other teams had a large fan base cheering them on. Whenever the WHS Slab Crabs had their name called out, there was very little if any applause. Other teams had impressive-looking equipment.

In the end, Gutshall believes that the KIS ‹ keep it simple ‹ engineering principle the team followed contributed to their victory.

The Mesa competition will be available to view on a DVD soon, and the students will be featured in a state trade magazine.

"We beat students attending tech schools," Gutshall said. "Our students will represent the entire state at the national competition. I am so proud of them."

After the big win in Mesa, the Slab Crabs themselves were ecstatic.

"We tried to get everyone's attention all the way home," Duffy said.

The group held their $2,500 check to the window so passengers in other vehicles could see it. They even attempted to grab the attention of a television news crew.

"We must repair our battlebot and make it better," Martinez said.

Gutshall says if all six team members are able to attend, additional funds are necessary. The Slab Crabs will be raising the remainder of the monies needed through fund-raisers and donations. A minimum of $2,500 must be raised to guarantee all six can travel to Miami, Fla. The group is also seeking sponsorships to secure equipment necessary for the national competition.

To make a donation, become an official team sponsor, or for more information contact Gutshall at 635-4474.