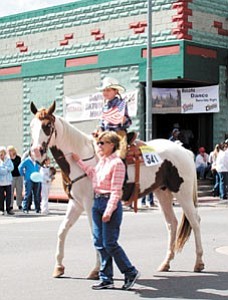 Many may not think of Williams when professional sports come to mind, but the city does have it at least once per year.

"This is our professional sports here in Williams," says Bob Dean, chairman for the Williams Labor Day PRCA Rodeo Committee.

Action, dust, shopping and fun abound as the event comes to town once again Friday through Labor Day at the Bob Dean Rodeo Grounds.

Numerous vendors featuring everything from clothing to fine art will be on hand and organizers invite the public to come by and shop early Saturday starting at 10 a.m., Sunday and Monday starting at noon.

The Williams Kiwanis Club will be providing food and beverages while manning the rodeo grounds' cook-shack.

The rodeo committee is putting up $7,700 for the PRCA events and an additional $1,100 for the WPRA barrel racing. With an average of just over 200 participants and typically around 3,000-4,000 spectators, Dean estimates the winners' pot could meet or exceed $30,000.

Single-day admission is $10 for adults, $5 for children under 12. Adult three-day passes are available for $24, with children's passes available for $12. Tickets can be purchased early at the Williams-Forest Service Visitor's Center for $1 off regular price.

Additionally, spectators are encouraged to keep their eyes on Route 66 as entries of all types will be lining up at Ninth Street for the annual parade. The Williams City Council will act as the parade's Grand Marshals on horseback with Northern Arizona University Sports Hall of Fame recipient Cherrie Osborn Blair as the Honorary Grand Marshal. This year's parade theme is "A Salute to Professional Sports."

Williams-Grand Canyon Chamber of Commerce representatives say that so far, the entries look good, but that there were spaces still available for vendors at the grounds as of Aug. 26.

All three competition days at the arena begin with a grand entry ceremony, which will include three generations of the Dean family ‹ Peggy Dean, Phyllis Billington, and Carley Rowe Billington, who entered last year's parade ‹ presenting the American flag.

The Dean family is no stranger to the rodeo world. Both Bob and Peggy have won numerous awards for their rodeo-related efforts not only in Williams, but also with organizations throughout the west. Bob himself used to be a team roper/bareback rider and still occasionally competes today. Peggy's father, Dutch Van Brunt, is featured on the event logo.

"This rodeo brings a lot of people to town and the main thing is it's what got the rodeo grounds fixed up so we can put on all the other events," Bob Dean said.

This weekend marks the 12th consecutive year the Labor Day PRCA Rodeo has been held in Williams. The rodeo had been going on in town for many years, stopped, then returned after a nine-year hiatus that almost cost the city the rodeo grounds themselves.

Dean recalled that at the end of that nine-year period, the city was about to tear the rodeo grounds down in favor of industrial space, when he was approached by chamber representatives and local businesses about bringing the rodeo back.

Dean was also quick to thank Jay Runston, Dan McNelly, and all the other rodeo fans from surrounding communities that have helped make the event a returning success.