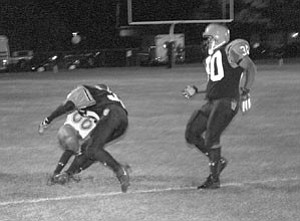 Vikings running back/line backer Tyrell Valdivia, No. 30, rushes in to assist in the take-down of a Red Mesa runner by another Vikings player at the Oct. 14 home game.

"We were a little thin on the line this week," said Vikings Coach Rick Shipley, citing injuries.

The boys in black and orange came out holding their own in the game's first half, scoring twice in just the first quarter.

Williams got the first touchdown of the game with a nine-yard pass into the endzone to Terin Agee from Jake MacDonald.

Red Mesa came back with a TD and conversion to take an 8-6 lead and just before the second quarter, Lucas Zabala scored on a 17-yard run and nailed it home with the conversion as well for a 14-8 Williams lead.

Red Mesa then responded with another two TDs for a 22-14 Red Mesa score at the half.

The opponents came back strong after the halftime break with three TDs ‹ two in the third and one early in the fourth for a 44-14 score.

The Vikings came back one more time with a 22-yard pass from MacDonald to Agee for a 22-44 final score.

Shipley and other coaches are still impressed with the performance of their Vikings, despite the loss. Shipley cited MacDonald's outstanding year so far and the offensive efforts of Agee, Zabala, and Wesley Scruggs.

Numbers for the game include 104 yards rushing for Zabala. MacDonald was seven for 12 on passing for 69 yards and two TDs, while Agee had three receptions for 50 yards.

The battle brings the Vikes to 3-2 in conference play and 3-5 overall. The Vikings are now tied for third place in 2A with Red Mesa. St. John's has the number-one spot while Camp Verde, who the Vikes will face on the road Friday, is in second. A win over Camp Verde forces a 3-way tie for second, but a loss will mean no playoff action this year for the younger Vikings team.

Vikes crush Rough Rock
Vikings win at homecoming!
Vikings season a builder
Vikings win one, lose one in preparation for Pinon
One more game to go before the playoffs...<br>
Event Calendar