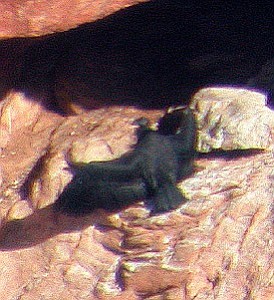 One of last year¹s hatchlings sunning outside its nest cave last summer.

Biologists ­ treated to the image of a whitish puffball of a chick ­ have confirmed a California condor hatching in Arizona. This is only the fourth condor to hatch in the wild in Arizona since the birds were re-introduced here in 1996. This marks a great success for the Condor Recovery Program that's working to bring these birds back from the brink of extinction.

"We're excited to see some consistency with three successful breeding seasons in a row," said Kathy Sullivan, project coordinator for the Arizona Game and Fish Department.

The chick at the monument, along the Arizona-Utah border, may be one of two to arrive this breeding season. Biologists believe a second chick also recently hatched in a remote part the Grand Canyon National Park, although they have not yet seen the chick.

"The same pair that produced a chick at the Grand Canyon two years ago again act as if they hatched a chick in the same nest cave," said Chris Parish, project manager for The Peregrine Fund. "We think they're watching over a nestling that hatched about a month ago."

A third new pair also produced an egg for the first time this season but abandoned their nest after around 79 days, about 22 days longer than the normal incubation period. Peregrine Fund biologists entered the cave in June and found the egg intact. Producing a "fertile" egg on their first attempt is encouraging despite the fact that it failed to hatch. Past experience indicates the pair is likely to be successful in future breeding attempts.

"The number of pairs now breeding in the wild in California and Arizona is very encouraging and shows that the program is moving forward with recovery as expected," said Jesse Grantham, California condor coordinator for the U.S. Fish and Wildlife Service.

There are 53 free-flying condors in Arizona. There are 56 in California, nine in Baja and 156 in the captive breeding program. The total population is 274.

Back in 1982, only 22 California condors were left in the world. Efforts to capture and breed those birds have been successful, and condors were reintroduced in Arizona in 1996. Condors are now released throughout the year at the Vermilion Cliffs. There are California condors have been federally listed as endangered since 1967. The birds can weigh 18 to 22 pounds and have a wingspan of 9 1/2 feet.

The condor reintroduction project in Arizona is a joint project of many partners, including The Peregrine Fund, Arizona Game and Fish Department, U.S. Fish and Wildlife Service, Bureau of Land Management, National Park Service, Kaibab National Forest, Utah Division of Wildlife Resources, Southern Utah's Coalition of Resources and Economics, and numerous other partners.

The California condors are being released as a "non-essential/experimental population" under section 10(j) of the Endangered Species Act. Section 10(j) provides that the species can be released in an area without impacting current or future land use planning. This authority has been spelled out further in an innovative agreement between the U.S. Fish and Wildlife Service and local governments.

This "Implementation Agreement" spells out a positive working relationship between the federal government and the various local governments.

For more on condors, visit The Peregrine Fund's Web site at www.peregrinefund.org. You can find updates in the Notes From the Field section as well as photos and other condor information.