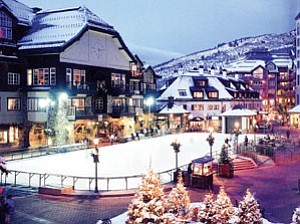 An outdoor skating rink could add charm to downtown Williams during the Mountain Village Holiday. The above photo of the Beaver Creek Village in Colorado is an example Williams organizers are showing anyone interested in bringing ³Christmastown USA² to downtown Williams.

Williams City Judge and Rotarian, Bill Sutton Jr., has big ideas in mind for Christmas in Williams this year and is asking the community to rally behind the cause.

"The only limitations are our own limitations ‹ there's so much we can do with this," Sutton said.

Noting the success of certain small towns across the United States that go all-out with Christmas decorations and activities, Sutton began to envision Williams during Christmastime with even more lights, decorations and things to do, not unlike Durango or Aspen.

"I've always loved Christmas," Sutton explains. "When I was a little boy, I couldn't wait for the Christmas tree on the hill to go on because it would signify that the season has started. Williams is a perfect Christmas town with the snow, the trees, and the mountains ‹ our situation is fairly unique."

He then began sharing his vision with fellow Rotarians and locals some months ago, saying that, coupled with the success of the Grand Canyon Railway's Polar Express, the community's extra effort could turn Williams in to the definitive place to go in Arizona during the holidays.

His vision is to change not the name of Williams per se, but the concept of the town during the season into what he calls "Christmastown USA."

Sutton, however, doesn't want to monopolize the ideas or his vision. He has formed a committee that meets every Tuesday at 5 p.m. at the Cine Classics 66 Theatre in the Grand Canyon Hotel and invites any individual or civic organization that's interested to share their suggestions and help the committee form them into reality.

That includes ideas such as pushing local businesses to string up more than the usual amount of lights, placing lighted archways at the three major entrances into Williams, and using much more non-lit decorations ‹ such as multiple wreaths on several buildings. Other ideas include copious amounts of lights on the trees at Monument Park, and even raising enough funds to purchase a portable outdoor ice skating rink that could be placed at the Visitor's Center and seen from the GCR.

Having an outdoor rink, Sutton believes, will make Williams the only place in northern Arizona that offers one.

Additional suggestions have been brought to the table, such as having a corridor of lights on Grand Canyon Boulevard from the GCR to the downtown area to attract passengers; having numerous street vendors selling cider, hot chocolate and other Christmastime goodies; expanding arts and crafts vendors and the whole Mountain Village Holiday into a two-month-long event; getting more carolers out on the streets; increasing the size and number of lights on the city's High School Hill tree; putting another one on the north side of town; getting more churches involved with nativity scenes and carolers; and more.

The basic premise, according to Sutton, would be to have something Christmas-oriented on every downtown street and corner nearly every evening during the holiday season.

Sutton has also raised the issue of purchasing a large chime clock tower to be placed above the existing Seventh Street courthouse. The clock, he said, can be programmed during the holidays to play Christmas music.

All of the above may sound like quite a financial and labor undertaking, but Sutton and other committee members believe the ideas, if implemented, would easily pay for themselves through increased visitation and length of stay. They believe it would also benefit the community during a common down time.

"It would be a good economical influx of revenue when we need it most," he offers.

Sutton recently announced that the city of Tempe has an unused portable ice skating rink they may be willing to sell. Price had not yet been discussed, but Sutton said the size was 50 feet by 100 feet ‹ something that would easily fit in the Visitor's Center parking lot.

Meanwhile, the Christmas committee has set up a post office box for mailings, donations or info, and has an account set up at National Bank of Arizona in Williams called the Williams Needs an Angel Christmas account. The committee's mailing address is Williams Christmas Committee, P.O. Box 444, Williams, AZ, 86046.

Sutton admits that it may be tough for residents to get behind the project since the holiday season is still four to five months away, but stresses that movement is crucial now because it will be too late once the season begins.