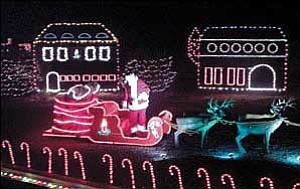 Once passengers of the Grand Canyon RailwayÕs Polar Expressª reach the ÒNorth Pole,Ó they are greeted by Santa, who boards the train to hand out gifts for children.

More of those interested in hopping onboard Grand Canyon Railway's opus holiday attraction, the Polar Expressª, will have the chance to do so this year.

Due to its overwhelming popularity, GCR officials have expanded capacity for the Christmastime service to 60,000 passengers for 2005.

"It really is turning out to be a family tradition," said GCR Executive Vice President Bob LaCivita, explaining that some riders will get off the Polar Express train, head right to the ticket office and purchase passes for the next year.

Based on the widely read Chris Van Allsburg children's book of a boy who hitches a ride to the North Pole aboard a magical train, the Polar Express does its best to duplicate the feel. Passengers board for a nighttime-only 45-minute round-trip to the "North Pole" -- an entire town of building facades decorated by thousands upon thousands of lights supervised by GCR Trainmaster Ervin White and organized by GCR employee Dan DeMott. Before returning to Williams, Santa himself boards the train and hands out silver sleighbells to children. During the ride, passengers are treated to hot chocolate and cookies as GCR employees and volunteers read the Polar Express story aloud and sing Christmas carols.

GCR's Polar Express, which won the Governor's Tourism Award in 2004, began in 2001 with a Friday and Saturday night test run after staff had discussed ways to capitalize on the Christmas season.

The initial test runs were so popular, that officials opened the Polar Express up for regular runs and sold 5,300 tickets that first Christmas.

Each year, the Polar Express is launched with a charity run for a chosen organization -- usually one that benefits disadvantaged children and/or families -- and this year is no different.

"We donate the train, which will hold 700-800 passengers, to those folks for one run," LaCivita said. "It starts us off with a good feeling for the Christmas season."

With regular daily rides to the Grand Canyon still happening year-round, LaCivita admits the Polar Express runs are a strain on employees, but says the benefits to both the railway and Williams for its tourism are worth the effort.

The 2005 runs will start Nov. 10 and will end Dec. 22 to allow GCR employees holiday time off. This year, however, LaCivita says the railway will also do another test run -- this one on Jan. 6-7 for the possibility of extending the Polar Express dates past Christmas and New Year's day.

Every year, the Polar Express gets bigger and falling right in line, so does the lighting displays at the GCR's "North Pole" and their train depot/hotel grounds. Last year, White, DeMott and others boasted nearly 400,000 lights for the GCR grounds and the Polar Express. While LaCivita wouldn't specify on any other changes for this year's run, he did give the News a hint.

"Hopefully, we'll have some surprises for everyone," he said.

Over 15,000 tickets have already been sold for the upcoming season and LaCivita says tickets are usually sold out by October. To hop onboard, simply call the GCR at 1-800-THE-TRAIN.