Williams Little League one game away from state 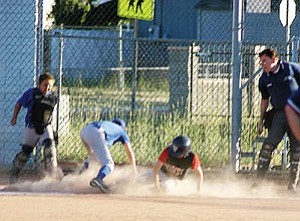 A player on the Williams Little League majors Storm team slides into home base at a game from earlier this season. Regular play is over for the majors and several players from all three WLL majors teams were chosen and have been playing on the Williams All Star team for the district championship. If Williams comes out victorious, the team will go to the state playoffs for the first time.

Though other divisions are still batting, the regular season has ended for the Williams Little League baseball majors category -- which features kids 9-12 -- but the swinging hasn't.

Several from the three different majors teams -- the Storm, the Scrappers, and the Wildcats -- and one from the Grand Canyon team were selected recently to play in two different little league All Star teams for the district championship.

Five 9-10 All Star games have been played so far with Williams coming out on top in at least three. There are a total of nine teams competing in this district and if Williams manages to keep its winning streak, the team could go on to the state playoffs for the very first time.

In game one, Sherwood pitched a no-hitter and helped the team beat Bagdad 12-0. In the second contest on June 23, Brownlee pitched a 7-2 win against Chino Valley. Then on June 25, Williams beat Sedona 12-0. On Monday, Williams went against Verde Valley for the first of two games against that team, but lost 7-10.

Williams played Verde Valley again last night for the championship. The results of that game -- and whether or not Williams goes to state -- will appear in next week's issue.

The other WLL All Star division is for those age 11-12. Coached by Tiger Grantham, they begin their tournament action right here in Williams on July 5 at the Cureton Park fields on Grand Canyon Boulevard.

Meanwhile, the WLL girls softball team ended their full season by landing a respectable third place June 18 when they lost in tournament play against Seligman 13-16.

"Our girls did a great job," said Coach Ofelia Robbins.

Both Alma Hernandez and Tasha Bowdon pitched the game with Hernandez getting an in-field home run.