One up, two down for boys and girls at season start 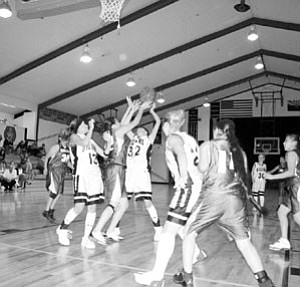 Lady Viking No. 32, Breanne Schulte led in scoring for all three of the team¹s latest games.

Like the varsity boys, it was one up, two down for the Williams High School Lady Vikings varsity basketball team with their past three games, two of which were the first for the regular season.

In their last pre-season game, the girls were victorious where the boys had trouble, beating Sedona 50-42.

"We played really well against them," said Head Coach Kristi Fredrickson. "Our shot percentage was only at 33 percent, but we took a lot more shots and we improved at the line with 60 percent."

The girls hustled furiously with 37 rebounds, however Fredrickson says the team needs to work on the offensive boards. Only nine of the 37 were offensive rebounds.

Breanne Schulte made her mark well with 27 big points. She shot 7-10 from the free throw stripe and snagged six rebounds while Kassie Pettit was quick with five steals.

The first two conference games, however, were unfortunate losses for the Lady Vikes, who dropped the Dec. 16 contest to Valley Sanders 39-49.

Schulte was on top again in points with 12 while Michelle Sandoval ruled the line, sinking five of seven.

The next day, Williams lost its battle on the road against the super tough St. John's squad 39-63.

The Lady Vikings fought hard, being down by only three at the half and only four at the end of the third quarter, but trouble brewed in the fourth. St. John's was able to force a big 32 turnovers, most of which were in the last period.

Again, Schulte was the star with 14 points, followed closely behind by Alyssa Dennison who had 12 points and shot four-four from the line.

For the JV girls, it was an easy 31-17 win against Sedona, but the younger players followed suit with their varsity counterparts, dropping the Valley Sanders match 31-46 and the St. John's game 24-37.

The girls hit the road south after the Christmas break for the Dec. 28-29 Camp Verde Cowboy Classic and their next home game will also be against Camp Verde Jan. 10.